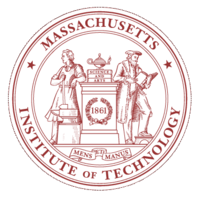 The Massachusetts Institute of Technology (MIT) is a private, coeducational research
university located in Cambridge, Massachusetts. MIT has five schools and one
college, containing 32 academic departments, with a strong emphasis on
scientific and technological research. MIT is one of two private land-grant
universities as well as a sea-grant and space-grant university.
History

MIT was founded by William Barton Rogers in 1861 in response to the increasing
industrialization of the United States. Although based upon German and French
polytechnic models of an institute of technology, MIT's founding philosophy of
"learning by doing" made it an early pioneer in the use of laboratory
instruction, undergraduate research, and progressive architectural styles. 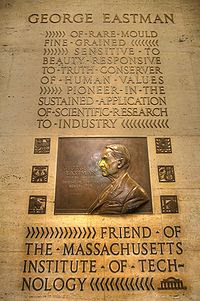 As a federally funded research and development center during World War II, MIT scientists
developed defense-related technologies that would later become integral to
computers, radar, and inertial guidance. After the war, MIT's reputation expanded
beyond its core competencies in science and
engineering into the social sciences including economics, linguistics, political
science, and management. MIT's endowment and annual research expenditures are among
the largest of any American university. 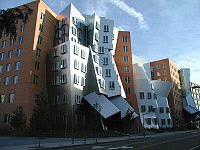 MIT graduates and faculty are noted for their technical acumen (63 Nobel Laureates,
47 National Medal of Science recipients, and 29 MacArthur Fellows),
entrepreneurial spirit (a 1997 report claimed that the aggregated revenues of
companies founded by MIT affiliates would make it the twenty-fourth largest economy
in the world),and irreverence (the popular practice of constructing elaborate
pranks, or hacking, often has anti-authoritarian overtones).
In 1861, The Commonwealth of Massachusetts approved a charter for the incorporation
of the "Massachusetts Institute of Technology and Boston Society of Natural History"
submitted by William Barton Rogers. Rogers sought to establish a new form of higher
education to address the challenges posed by rapid advances in science and
technology during the mid-19th century with which classic institutions were ill-prepared to deal.The Rogers Plan, as it came to be known, was rooted in three principles: the educational value of useful knowledge, the necessity of “learning by doing,” and integrating a professional and liberal arts education at the undergraduate level. 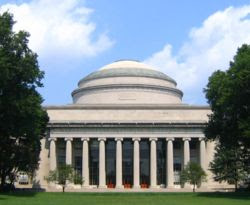 Because open conflict in the Civil War broke out only a few months later, MIT's
first classes were held in rented space at the Mercantile Building in downtown Boston in 1865. Construction of the first MIT buildings was completed in Boston's Back Bay in 1866 and MIT would be known as "Boston Tech." During the next half-century, the focus of the science and
engineering curriculum drifted towards vocational concerns instead of theoretical
programs. Charles William Eliot, the president of Harvard University, repeatedly
attempted to merge MIT with Harvard's Lawrence Scientific School over his 30-year
tenure: overtures were made as early as 1869 with other proposals in 1900 and
1914 ultimately being defeated. 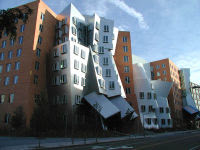 The attempted mergers occurred in parallel with MIT's continued expansion beyond the
classroom and laboratory space permitted by its Boston campus. President Richard
Maclaurin sought to move the campus to a new location when he took office in
1909. An anonymous donor, later revealed to be George Eastman, donated the
funds to build a new campus along a mile-long tract of swamp and industrial
land on the Cambridge side of the Charles River. In 1916, MIT moved into its handsome
new neoclassical campus designed by the noted architect William W. Bosworth which
it occupies to this date.

The new campus triggered some changes in the stagnating
undergraduate curriculum, but in the 1930s President Karl Taylor Compton and
Vice-President (effectively Provost) Vannevar Bush drastically reformed the
curriculum by re-emphasizing the importance of "pure" sciences like physics and
chemistry and reducing the work required in shops and drafting. Despite the
difficulties of the Great Depression, the reforms "renewed confidence in the ability
of the Institute to develop leadership in science as well as in engineering." The
expansion and reforms thus cemented MIT's academic reputation on the eve of World War
II by attracting scientists and researchers who would later make significant
contributions in the Radiation Laboratory, Instrumentation Laboratory, and other
defense-related research programs.MIT was drastically changed by its
involvement in military research during World War II. Bush was appointed head of
the enormous Office of Scientific Research and Development and directed funding to
only a select group of universities, including MIT. During the war and
in the post-war years, this government-sponsored research contributed
to a fantastic growth in the size of the Institute's research staff and physical
plant as well as placing an increased emphasis on graduate education.

As the Cold War and Space Race intensified and concerns about the technology gap
between the U.S. and the Soviet Union grew more pervasive throughout the 1950s and
1960s, MIT's involvement in the military-industrial complex was a source of
pride on campus. However, by the late 1960s and early 1970s, intense
protests by student and faculty activists (an era now known as "the troubles")
against the Vietnam War and MIT's defense research required that the MIT
administration to divest itself from what would become the Charles Stark Draper
Laboratory and move all classified research off-campus to the Lincoln Laboratory
facility.
Academics
Schools

School of Architecture and Planning
School of Engineering
School of Humanities, Arts, and Social Sciences
Sloan School of Management
School of Science
Whitaker College of Health Sciences and Technology