Macquarie University is an Australian public research university located in Sydney. Its main campus is in Macquarie Park and also has overseas campuses in Hong Kong and Singapore. Founded in 1964 by the New South Wales Government, it was the third university to be established in the metropolitan area of Sydney. Macquarie’s 126 hectare park-like campus belies its setting within the high-technology corridor of Sydney’s north-west.

Macquarie has an especially strong reputation in the business and commerce area, such as the actuarial studies and linguistic programme. According to the 'Good University Guide' of Australian University, starting salaries for Macquarie graduates have been ranked as the highest in Australia for ten conscutive years (1998-2007) and university made 5 star ratings in seven different performances categories (2007).Macquarie also continues to be one of Australia's most postgraduate universities, more than 30% of students at Macquarie are taking their graduate/postgraduate degrees and almost 1/3 of them are supported by government and/or university scholarship. Macquarie is currently reviewing its academic structure, with its 32,000 students to be located within four faculties – Business and Commerce; Humanities; Human Sciences, and Science. 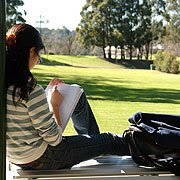 Macquarie University's linguistics department developed the Macquarie Dictionary, the copyright on which it still owns. The university also contained a NASA research lab.

After much debate a future campus location was selected in what was then a semi-rural part of North Ryde, and it was decided that the future university be named after Lachlan Macquarie, an important early governor of the colony of New South Wales.

Between 1968 and 1969 enrolment at Macquarie increased dramatically with an extra 1200 EFTS with 100 new academic staff employed. 1969 also saw the establishment of the Macquarie Graduate School of Management, MGSM.

Macquarie grew during the seventies and eighties with rapid expansion in courses offered, student numbers and development of the site. In 1990 the University absorbed the Institute of Early Childhood Studies of the Sydney College of Advanced Education, under the terms of the Higher Education (Amalgamation) Act 1989. In their book Liberality of Opportunity, Bruce Mansfield and Mark Hutchinson describe the founding of Macquarie University as ‘an act of faith and a great experiment’

Effective from 2009 the old Faculty System has been replaced by this system: