ETH Zurich was founded in 1855 as Federal Polytechnical School. In view of its 150th anniversary 2005, the chair for the history of technology of ETH Zurich has produced the «ETHistory 1855–2005» web site.

The ETH is a federal institute (i.e., under direct administration by the Swiss government), whereas the University of Zurich is a cantonal institution. The decision for a new federal university was heavily disputed at the time, because the liberals pressed for a "federal university", while the conservative forces wanted all universities to remain under cantonal control, with the goal of giving liberal thoughts no refuge. In the beginning, both universities were co–located in the buildings of the University of Zurich.

In 1909, the course program of the ETH was restructured to that of a real university, from its early, very schoolish agenda, and the ETH was granted the right to award doctorates. In 1911, it was given its current name, Eidgenössische Technische Hochschule. In 1924, another reorganization structured the university in 12 departments.

Since 1993 the ETH Zürich, the EPFL, and four associated research institutes were joined and administered together as the "ETH Bereich".

The ETH is regularly ranked among the top universities in the world. It is placed between 3rd and 6th in Europe and between 10th and 27th in the world in international rankings by the Academic Ranking of World Universities and the Times Higher Education Supplement World University Rankings. It was also ranked 12th by the latter in both sciences and technology in 2005.

Historically, the ETH achieved its reputation particularly in the fields of chemistry, mathematics and physics. There are 21 Nobel Laureates who are associated with the ETH, counting only graduates of the ETH and Professors who have been honored for their work at ETH. The most recent Nobel Laureate is Kurt Wüthrich who was awarded the Nobel Prize in chemistry in 2002.

The basis of education at the ETH Zurich is formed by the core areas of engineering, natural sciences, architecture and mathematics. In addition, courses in physical education and military sciences are offered. The goal of instruction is to enable the students to acquire solid technical knowledge, practical skills, and the ability to take part in interdisciplinary activities. Relying on an atmosphere of a mutual trust among teachers and students, and a reciprocal awareness of social and ethical concerns, the ETH Zurich encourages in its students both individual creativity and the ability to reflect on and evaluate their own actions, with the aim of achieving a comprehensive outlook and a responsible mode of behaviour. Considering the need for a new approach to knowledge and technology and a better understanding of the nature of man, the ETH Zurich treats the humanities and social sciences as integral parts of its educational profile.

Further education
The ETH Zurich takes into account the fact that learning is being seen more and more as a life-long process. Correspondingly, the basic curriculum is kept relatively short and is later supplemented by postgraduate and further education courses. This is to promote a more rapid transfer of knowledge and technology between the university and the world outside.

Research
At the ETH Zurich teaching and research are closely linked. Equal standing is assigned to knowledge-oriented basic research and to problem-solving research. Both areas are dedicated to fulfilling the highest standards, and are long-term oriented. The ETH Zurich is specially committed to the continuous development of that innovative potential within society and industry.

International links
As an institute of higher learning and research, the ETH Zurich cultivates an international standing. It is aware that its scientific contribution has to be confirmed by the international research community. Thus the ETH Zurich strongly supports international co-operation in all fields of research and education. As a long-term strategy, it also devotes special attention to structurally and economically underdeveloped countries.

Co-operation
The ETH Zurich encourages partnerships and interdisciplinary co-operation among members of its community, with other educational and research institutions, with industry, and with the public administration, and it believes in keeping the public informed regarding these activities. The sustainable development of human society depends on our efforts both to create and support a strong and innovative economy.

Self-management
The ETH Zurich sets itself the goal of efficient self-management in the sense of providing optimal services to education and research within the given juridical framework. It endeavours to gain additional financial support, beyond the allotted public funds, from industry and private sources. Faithful to the basic principles of research and teaching, the ETH Zurich practices an economical use of resources such as land, materials and energy, and assigns high priority to security for human beings and the environment.

Employer
In its relationship with staff, the ETH Zurich conceives itself to be a responsible employer committed to observing up-to-date employment practices and working conditions. It adheres to a co-operative, fair style of management, allowing forms of participation appropriate to employeesí occupation and position, and it maintains an open information policy. No discrimination among its members is permitted on the basis of sex or social, ethnic or religious origin. The ETH Zurich wants to increase the proportion of women in all fields of research, teaching and administration. The ETH Zurich demands a high level of human and professional competence from senior personnel in all categories.

Location Zurich
The ETH Zurich benefits greatly from Zurichís urban setting. It feels closely tied to and responsible towards the city and canton. For its part it contributes to the cultural life of the city and region, and in all its activities pays regard to urban needs.
Departments
Agriculture and Food Science
Architecture
Biology
Civil, Environmental and Geomatics Engineering
Chemistry and Applied Biosciences
Computer Science
Earth Sciences
Environmental Sciences
Humanities, Social and Political Science
Information Technology and Electrical Engineering
Management, Technology and Economics
Materials Science
Mathematics
Mechanical and Process Engineering
Physics 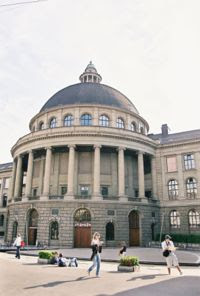