Duke University is a private coeducational research university located in Durham, North Carolina, United States. Founded by Methodists and Quakers in the present-day town of Trinity in 1838, the school moved to Durham in 1892. 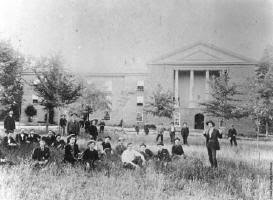 History
Duke University was created in 1924 by James Buchanan Duke as a memorial to his father, Washington Duke. The Dukes, a Durham family that built a worldwide financial empire in the manufacture of tobacco products and developed electricity production in the Carolinas, long had been interested in Trinity College. Trinity traced its roots to 1838 in nearby Randolph County when local Methodist and Quaker communities opened Union Institute. The school, then named Trinity College, moved to Durham in 1892. In December 1924, the provisions of James B. Duke's indenture created the family philanthropic foundation, The Duke Endowment, which provided for the expansion of Trinity College into Duke University.

As a result of the Duke gift, Trinity underwent both physical and academic expansion. The original Durham campus became known as East Campus when it was rebuilt in stately Georgian architecture. West Campus, Gothic in style and dominated by the soaring 210-foot tower of Duke Chapel, opened in 1930. East Campus served as home of the Woman's College of Duke University until 1972, when the men's and women's undergraduate colleges merged. Both men and women undergraduates now enroll in either the Trinity College of Arts & Sciences or the Pratt School of Engineering. In 1995, East Campus became the home for all first-year students. 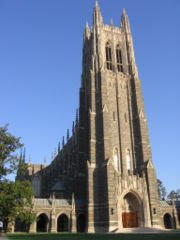 The University is organized into two undergraduate and eight graduate schools. The undergraduate student body, which includes 40 percent racial or ethnic minorities, comes from all 50 U.S. states and 117 countries.In its 2008 edition, U.S. News & World Report ranked the undergraduate division eighth in the nation while ranking the medical, law, and business schools among the top 11 in the country.Duke's research expenditures are among the largest 20 in the U.S. and its athletic program is one of the nation's elite. Competing in the Atlantic Coast Conference, the athletic teams have captured nine national championships, including three by the men's basketball team.

Besides academics, research, and athletics, Duke is also well known for its sizable campus and Gothic architecture, especially Duke Chapel. The forests surrounding parts of the campus belie the University's proximity to downtown Durham. Duke's 8,610 acres (35 km²) contain three contiguous campuses in Durham as well as a marine lab in Beaufort.
Construction projects have updated both the freshmen-populated Georgian-style East Campus and the main Gothic-style West Campus, as well as the adjacent Medical Center over the past five years. Other projects are underway on all three campuses, including a 50- to 75-year overhaul of Central Campus, the first phase of which is expected to be completed in early 2011.

Email ThisBlogThis!Share to TwitterShare to FacebookShare to Pinterest
Labels: Duke University, USA
Newer Post Older Post Home
The roots of education are bitter, but the fruits is sweet ~ Aristotle
Education is the most powerful weapon which you can use to change the world ~ Nelson Mandela
Education is not a preparation for life, Education is life itself ~ John Dewey