Vanderbilt University is a private, nonsectarian, coeducational research university in Nashville, Tennessee, United States. Founded in 1873, the university is named for shipping and rail magnate "Commodore" Cornelius Vanderbilt, who provided Vanderbilt its initial $1 million endowment despite having never been to the South. The Commodore hoped that his gift and the greater work of the university would help to heal the sectional wounds inflicted by the Civil War. 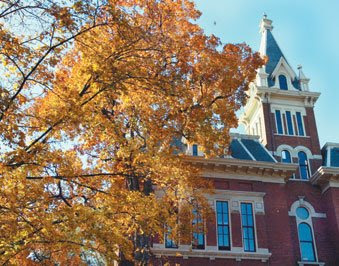 Today, Vanderbilt comprises four undergraduate and six graduate schools, enrolling approximately 11,800 students from all 50 U.S. states and over 90 foreign countries. In its 2008 ranking of universities, U.S. News & World Report placed Vanderbilt 19th overall, and ranked the schools of education, law, medicine, and nursing among the top 20 in the country. The university is among the top 25 recipients of federal educational research funds. Also affiliated with the university are several research institutes, the Freedom Forum First Amendment Center, the Dyer Observatory, and the comprehensive Vanderbilt University Medical Center (VUMC), the only Level I trauma center in Middle Tennessee.

With the exception of the off-campus observatory, all of Vanderbilt's facilities are situated on a 330-acre (1.3 km²) plot in the heart of Nashville only 1.5 miles (2.4 km) from downtown. Despite its urban surroundings, the campus itself is a national arboretum and features over 300 species of trees and shrubs.


Commodore Cornelius Vanderbilt had a vision of a place that would “contribute to strengthening the ties that should exist between all sections of our common country” when he gave a million dollars to create a university in 1873. Today, that vision has been realized in Vanderbilt, an internationally recognized research university in Nashville, Tennessee, with strong partnerships among its 10 schools, neighboring institutions and the community.

Vanderbilt offers undergraduate programs in the liberal arts and sciences, engineering, music, education and human development, as well as a full range of graduate and professional degrees. The combination of cutting edge research, liberal arts and a distinguished medical center creates an invigorating atmosphere where students tailor their education to meet their goals and researchers collaborate to solve complex problems affecting our health, culture and society.

Vanderbilt provides a gateway to greatness, drawing the best and brightest students from across the nation and around the world. Vanderbilt alumni can be found in Congress, on the judicial bench, heading corporations, conducting innovative medical research, writing for and appearing on the stage and screen, and playing in the NFL, NBA and major league baseball.

Commodore Cornelius Vanderbilt was in his 79th year when he decided to make the gift that founded Vanderbilt University in the spring of 1873. The $1 million that he gave to endow and build the university was the Commodore's only major philanthropy. Methodist Bishop Holland N. McTyeire of Nashville, a cousin of the Commodore's young second wife, went to New York for medical treatment early in 1873 and spent time recovering in the Vanderbilt mansion. He won the Commodore's admiration and support for the project of building a university in the South that would "contribute to strengthening the ties which should exist between all sections of our common country." 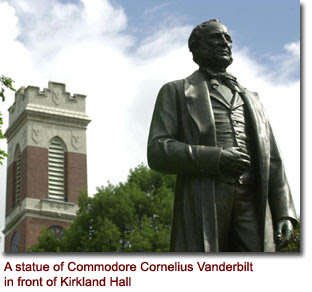 McTyeire chose the site for the campus, supervised the construction of buildings and personally planted many of the trees that today make Vanderbilt a National Arboretum. At the outset, the university consisted of one Main Building (now Kirkland Hall), an astronomical observatory and houses for professors. Landon C. Garland was Vanderbilt's first chancellor, serving from 1875 to 1893. He advised McTyeire in selecting the faculty, arranged the curriculum and set the policies of the university.

For the first 40 years of its existence, Vanderbilt was under the auspices of the Methodist Episcopal Church, South. The Vanderbilt Board of Trust severed its ties with the church in June 1914 as a result of a dispute with the bishops over who would appoint university trustees.

From the outset, Vanderbilt met two definitions of a university: It offered work in the liberal arts and sciences beyond the baccalaureate degree and it embraced several professional schools in addition to its college. James H. Kirkland, the longest serving chancellor in university history (1893-1937), followed Chancellor Garland. He guided Vanderbilt to rebuild after a fire in 1905 that consumed the main building, which was renamed in Kirkland's honor, and all its contents. He also navigated the university through the separation from the Methodist Church. Notable advances in graduate studies were made under the third chancellor, Oliver Cromwell Carmichael (1937-46). He also created the Joint University Library, brought about by a coalition of Vanderbilt, Peabody College and Scarritt College. 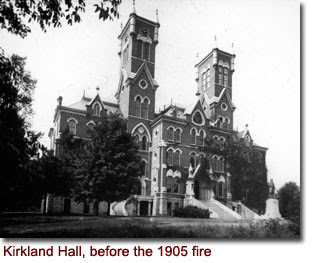 Remarkable continuity has characterized the government of Vanderbilt. The original charter, issued in 1872, was amended in 1873 to make the legal name of the corporation "The Vanderbilt University." The charter has not been altered since.

The original Vanderbilt campus consisted of 75 acres. By 1960, the campus had spread to about 260 acres of land. When George Peabody College for Teachers merged with Vanderbilt in 1979, about 53 acres were added. 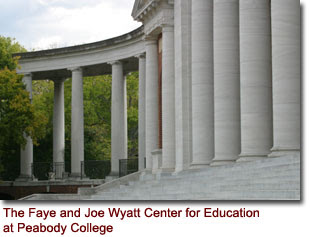 In the planning of Vanderbilt, the assumption seemed to be that it would be an all-male institution. Yet the board never enacted rules prohibiting women. At least one woman attended Vanderbilt classes every year from 1875 on. Most came to classes by courtesy of professors or as special or irregular (non-degree) students. From 1892 to 1901 women at Vanderbilt gained full legal equality except in one respect -- access to dorms. In 1894 the faculty and board allowed women to compete for academic prizes. By 1897, four or five women entered with each freshman class. By 1913 the student body contained 78 women, or just more than 20 percent of the academic enrollment.

National recognition of the university's status came in 1949 with election of Vanderbilt to membership in the select Association of American Universities. In the 1950s Vanderbilt began to outgrow its provincial roots and to measure its achievements by national standards under the leadership of Chancellor Harvie Branscomb. By its 90th anniversary in 1963, Vanderbilt for the first time ranked in the top 20 private universities in the United States.

Vanderbilt continued to excel in research, and the number of university buildings more than doubled under the leadership of Chancellors Alexander Heard (1963-1982) and Joe B. Wyatt (1982-2000), only the fifth and sixth chancellors in Vanderbilt's long and distinguished history. Heard added three schools (Blair, the Owen Graduate School of Management and Peabody College) to the seven already existing and constructed three dozen buildings. During Wyatt's tenure, Vanderbilt acquired or built one-third of the campus buildings and made great strides in diversity, volunteerism and technology.

The university grew and changed significantly the leadership of its seventh Chancellor Gordon Gee, who served from 2000-2007. Vanderbilt led the country in the rate of growth for academic research funding, which increased to more than $450 million. Applications for admission rose from 8,000 in 2000 to more than 13,000 in 2007, and the university became one of the most selective institutions in the country. Gee flaunted conventional wisdom in 2003 with a radical restructuring of the athletics program, which resulted in improved student athlete academic achievement and a jump in the university's athletic performance, with seven teams being ranked in the top 25 nationally in 2006-2007. During this time the university saw a 50 percent increase in the number of minority students, completed or began construction of more than $700 million in new facilities, including one of the nation's best children's hospitals, and became the most-preferred provider of health care services in middle Tennessee.

Today, Vanderbilt University is a private research university of 6,378 undergraduates and 5,229 graduate and professional students. The university comprises 10 schools, a distinguished medical center, a public policy center and The Freedom Forum First Amendment Center. Vanderbilt offers undergraduate programs in the liberal arts and sciences, engineering, music, education and human development as well as a full range of graduate and professional degrees. The university is consistently ranked as one of the nation's top 20 universities by publications such as U.S. News & World Report, with several programs and disciplines ranking in the top 10.

The combination of cutting-edge research, liberal arts and a distinguished medical center creates an invigorating atmosphere where students tailor their education to meet their goals and researchers collaborate to solve complex questions affecting our health, culture and society. 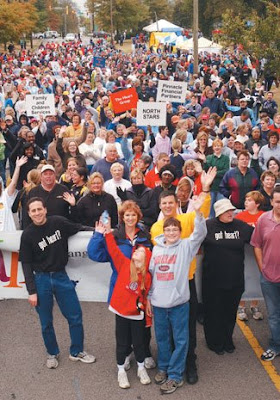 Percentage of undergraduates who live on campus: 84%

Percentage of undergraduates receiving some sort of financial aid: 60% 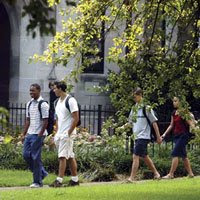 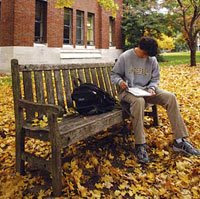 School of Nursing: Master of Science in Nursing, Doctor of Philosophy*

Owen Graduate School of Management: Master of Business Administration, Master of Science in Finance, Master of Accountancy, Doctor of Philosophy*

Vanderbilt is a member of the Association of American Universities.

Nobel Laureates
Muhammad Yunus, Ph.D. 1971, 2006 Peace Prize for establishing the Grameen Bank and his pioneering the practice of providing micro loans to the impoverished.
Vanderbilt Medical Center faculty member Stanley Cohen, 1986 Prize in Medicine, for his discovery with a colleague of epidermal growth factor.
Stanford Moore, B.A. 1935, 1972 Prize in Chemistry, for fundamental contributions to the understanding of enzyme chemistry.
Vanderbilt Medical Center faculty member Earl Sutherland Jr., 1971 Prize in Medicine, for his discovery of the metabolic regulating compound cyclic AMP.
Vanderbilt physics professor Max Delbruck (1940-47), 1969 Prize in Physiology or Medicine, for discoveries concerning the replication mechanism and the genetic structure of viruses.

Kaplan/Newsweek
One of 25 new "Ivies" 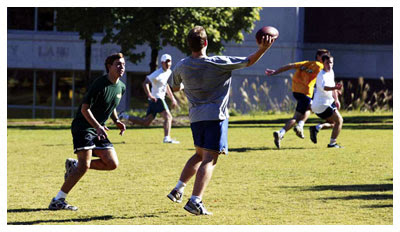 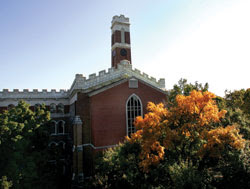 Located a mile and a half southwest of downtown Nashville, the campus is a park-like setting. Vanderbilt is home to more than 300 tree and shrub varieties and was designated a national arboretum in 1988. Buildings on the original campus date to its founding in 1873. The Peabody section of campus has been a registered National Historic Landmark since 1966. Off-campus facilities include the Vanderbilt Dyer Observatory, situated on a 1,131-foot hill, six miles south of campus.

Email ThisBlogThis!Share to TwitterShare to FacebookShare to Pinterest
Labels: USA, Vanderbilt University
Newer Post Older Post Home
The roots of education are bitter, but the fruits is sweet ~ Aristotle
Education is the most powerful weapon which you can use to change the world ~ Nelson Mandela
Education is not a preparation for life, Education is life itself ~ John Dewey