Cranfield University is a British postgraduate university based on two campuses, with a research-oriented focus. The main campus is at Cranfield, Bedfordshire; the other is at Shrivenham, Oxfordshire. A third campus at Silsoe was relocated to the Cranfield campus and closed at the end of 2007. 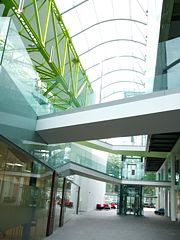 The main campus is unique in the United Kingdom for having its own operational airport (Cranfield Airport) next to the main campus. The facilities at the airport are used by Cranfield University's own aircraft in the course of aerospace teaching and research.

This is one of their mission "Cranfield’s mission to transform knowledge into ingenious solutions in science, technology and management places us at the forefront of some of the world’s most practical, cutting-edge projects.

From unique cabin evacuation research to finding life on Mars, from a frost blanket for racecourses to zero-emission cars, and from the next generation of anti-landmine devices to a new blood glucose monitor, Cranfield’s focus is squarely on the application of its research.

Cranfield has a global reputation for inspirational teaching and research, industrial-scale facilities and superior links with industry and commerce

And as a wholly postgraduate institution, Cranfield is the first choice for ambitious and skilled individuals wishing to enrol on Masters’, Doctorate and professional development programmes.

Our passion for the areas of expertise we operate in - aerospace, automotive and motorsport, defence, engineering, health, management, manufacturing, environment and water – makes us uniquely placed for both students and corporate partners alike.".

The University was formed in 1946 as the College of Aeronautics on the former Royal Air Force base of RAF Cranfield which opened in 1937. (See also entries on Harold Roxbee Cox, Sir Stafford Cripps and Roy Fedden, all individuals associated with the foundation of the original College of Aeronautics). Between 1955 and 1969 a period of diversification took place. In 1967 the college presented the Privy Council with a petition for the grant of a Royal Charter along with a draft charter for a new institution to be called Cranfield Institute of Technology. The Cranfield Institute of Technology was incorporated by Royal Charter in 1969, giving the institution its own degree-awarding powers.

Since then the former National College of Agricultural Engineering established at Silsoe near Luton, Bedfordshire, during the 1950s, was incorporated. An academic partnership with the Royal Military College of Science (RMCS) at Shrivenham was formed in 1984. RMCS, whose roots can be traced back to 1772, is now a part of the Defence Academy of the United Kingdom and now forms the Defence College of Management and Technology, known as 'DCMT'. In 1993 the Royal Charter changed the institution's name to Cranfield University.

The first 50 year history of Cranfield University is described comprehensively, but concisely, by the book Field of Vision.

In 2006, it was decided that activities on the Silsoe site would be relocated to the main campus at Cranfield. As a result, a substantial building program was undertaken on Cranfield campus, including the provision of departmental buildings and additional accommodation (Stringfellow Hall), and the bulk of Silsoe-based staff have now transferred to Cranfield.

School of Engineering, known as SoE and incorporating the original College of Aeronautics
School of Applied Sciences, known as SAS and formerly the School of Industrial and Manufacturing Science
Cranfield School of Management, known as SoM
Defence College of Management and Technology (DCMT), Shrivenham
Cranfield Health, a new school opened in 2008 by Professor Sir Liam Donaldson, currently the Chief Medical Officer for England and an honorary graduate of the university.

What is world rank of Cranfield university in aerospace engineering?