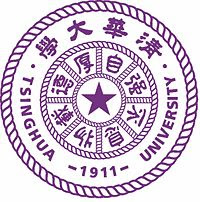 Situated on several former royal gardens of the Qing Dynasty, surrounded by a few historical sites in northwest Beijing, is the campus of Tsinghua University. The garden-like landscape, with the Wanquan River meandering through, has inspired and motivated generations of students.
History
Tsinghua University was established in 1911 originally as "Tsinghua Xuetang," a preparatory school for students who would be sent by the government to study in universities in the United States. The school was renamed "Tsinghua School" in 1912. The university section was instituted in 1925 and undergraduate students were then enrolled. The name "National Tsinghua University" was adopted in 1928, and in 1929 the Research Institute was set up.
Although Western culture was pervasive in the early history of the university, Chinese culture were also cherished and widely studied. The faculty greatly valued the interaction between the Chinese and Western cultures, the sciences and humanities, the ancient and modern. Tsinghua scholars Wang Guowei, Liang Qichao, Chen Yinque and Zhao Yuanren, renowned as the "Four Tutors" in the Institute of Chinese Classics, advocated this belief and had a profound impact on Tsinghua's later development.

The Resistance War against the Japanese Invasion in 1937 shattered the campus' serenity and forced Tsinghua to move to Kunming and join with Peking University and Nankai University to form the "Southwest Associated University." Despite the tumult, hardships and material scarcity brought on by the war, the teachers and students persisted with their work and studies, achieving outstanding academic performance even under such difficult conditions. After the war, in 1946, the university was moved back to its original location in Beijing.
The Grand Auditorium

The Tsinghua faculty and students have left a lasting imprint on the history of modern China. They actively resisted the Japanese invasion, participated in the influential "December 9th Movement of Patriotism and Democracy" and the movement of the "Struggle against Starvation, Civil War and Persecution," and devoted themselves to the pursuit and spread of the truth that would give new birth to the nation in the midst of her struggle for independence.

After the founding of the People's Republic of China, the university was molded into a polytechnic institution focusing on engineering in the nationwide restructuring of universities and colleges undertaken in 1952. In November 1952, Jiang Nanxiang became the president of the university. He sought to best way to promote Chinese higher education and made significant contributions in redirecting Tsinghua to become the national center for training engineers and scientists with both professional proficiency and personal integrity.

Tsinghua has flourished since 1978, with the re-establishment of the departments in sciences, economics and management, and the humanities. The Tsinghua graduate school has been recognized nationally, ranking first in the National Evaluation of Graduate Schools. The School of Continuing Education makes the best use of modern information technologies, as well as the advanced educational resources at Tsinghua. Currently, the university consists of 44 departments distributed in 11 schools, including the schools of sciences, architecture, civil engineering, mechanical engineering, information science and technology, humanities and social sciences, economics and management, law, arts and design, public policy and management, and applied technology. A medical school is currently being established. Tsinghua is developing into a comprehensive university at a breathtaking pace.

With a splendid legacy accumulated over the past 90 years, Tsinghua has retained its character and charm while promoting rigorous scholarship research, ensuring academic and educational prestige in China and abroad. The university currently has over 7,100 faculty and staff, with over 900 full professors and 1,200 associate professors, including 24 members of the Chinese Academy of Sciences and 24 members of the Chinese Academy of Engineering.
The old gate 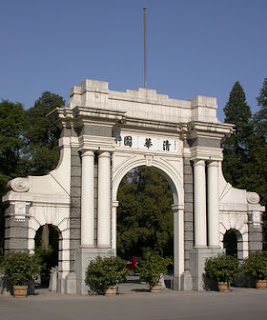 The educational philosophy of Tsinghua is to "train students with integrity." Among the over 100,000 students who have graduated from Tsinghua since its founding are many outstanding scholars, eminent entrepreneurs and great statesmen remembered and respected by their fellow Chinese citizens. Hence, to study at Tsinghua is the dream of many Chinese youth. Presently, Tsinghua has over 20,000 students, including 12,000 undergraduates, 6,200 master's degrees candidates and 2,800 doctoral candidates.

With strong support from the nation and in the
face of unprecedented opportunities, Tsinghua University is poised to become a world-class university in the 21st century. With the inspiring motto "Self-discipline and Social Commitment," Tsinghua is dedicated to the well being of Chinese society.
Faculties

School of Information Science and Technology

School of Marxism
School of Humanities and Social Sciences

School of Economics and Management

School of Journalism and Communication