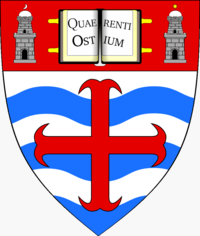 The University of Nottingham is a leading research university in the city of Nottingham, in the East Midlands of England. It is a member of the Russell Group,and of Universitas 21, an international network of research-led universities. The University was ranked among the top ten higher education institutions in the UK by The Telegraph in 2003, and Shanghai Jiao Tong University's world rankings, and it won the Times Higher Education UK University of the Year Award for 2006/7.

In 2007, it had more than 36,000 registered students, with more than 8 applicants per place. This included over 7,500 international students from more than 145 countries. Its current Chancellor and President is Professor Fujia Yang, and its Vice-Chancellor is Sir Colin Campbell. Sir Colin has announced his retirement for September 2008, and Sir Colin's position will be filled by Professor David Greenway.

Nottingham's first civic college was opened in the city centre in 1881, four years after the foundation stone was laid by former prime minister, W E Gladstone. This achievement was made possible by an anonymous benefactor who had offered £10,000 for a college on condition that a suitable building be erected by the Council and that the college should be endowed with £4,000 a year.

After the First World War, the college expanded rapidly and outgrew its original building. A generous gift by Sir Jesse Boot, of 35 acres of land at Highfields, presented the solution. The land was to be devoted to the College but was also to be a place of recreation for the people of Nottingham, a value that is still held today as visitors freely enjoy the landscaped woodlands and parks that were created on the site.

In 1928 the College moved to what is now the main campus, University Park. Initially, it was accommodated in the elegant Trent Building, with its distinctive tower, and was officially opened by King George V in November of that year. An endowment fund was set up to support the further development of the site and to provide new courses and scholarships.

Even in its early days on this site, the College attracted high profile visiting lecturers including Professor Albert Einstein, Mahatma Gandhi and H G Wells.

The Second World War brought changes to the College. Although the only building to suffer bomb damage was the original city centre site, the government's "dig for victory" campaign saw the carefully-tended lawns at Highfields given over to food production.

In 1948, the college was awarded the Royal Charter, becoming The University of Nottingham and now able to confer degrees in its own name.

During this period, the Institute of Education was founded and the School of Agriculture was established when the Midland College of Agriculture at Sutton Bonington merged with the University.

Since then, the University has continued to grow. The Medical School, the first to be established in the 20th century, opened in 1970 and, in 1995, the School of Nursing was formed following the merger of the Mid-Trent College of Nursing and Midwifery.

The £50 million Jubilee Campus development opened in 1999 and subsequently the prestigious National College for School Leadership has been co-located on the campus.

Recent developments have been even more ambitious, with an overseas campus opened in Malaysia in 1999 and the more recent launch of The University of Nottingham in China. Both locations have new purpose-built campuses under development.

2003 saw a landmark in Nottingham's long list of academic achievements - the award of the Nobel Prize for Medicine to Sir Peter Mansfield for his work in the application of magnetic resonance imaging (MRI). The award is shared with Paul Lauterbur from the University of Illinois.

MRI has been compared to the discovery of x-rays in its significance to medicine. From the first work carried out in this area in the 1970s, MRI scanning has now become an indispensable tool in medical diagnostics, drastically reducing the need for invasive surgery. There are over 60 million MRI scans carried out worldwide each year.

The University's School of Physics was already recognised as an international centre of excellence for nuclear magnetic resonance when the development of MRI began there. The importance of Sir Peter's work led to the founding of the Magnetic Resonance Centre in 1991 - now named the Sir Peter Mansfield Magnetic Resonance Centre in his honour and headed by Professor Peter Morris.

Shortly after hearing the news about Sir Peter Mansfield's Nobel Prize, the University was delighted to hear that former Nottingham student and academic, Professor Clive Granger, had been awarded the Nobel Prize for Economic Science. He spent 22 years at The University of Nottingham as an undergraduate, lecturer and professor before moving to the University of California in San Diego.

2004 saw the centenary of a major breakthrough by Professor Frederic Stanley Kipping. His pioneering work led to the discovery of silicone polymers and was the foundation of what is today a multi-billion pound industry.

Research by a team at Nottingham led by Professor Don Grierson OBE FRS identified several important plant genes affecting food quality and developed methods for turning these genes off and on. The team produced the first GM food to be approved for sale on both sides of the Atlantic. A number of licensing deals for this technology are being discussed with a view to commercialisation.

With the University's investment in new research, there are bound to be many more highlights in the future. Nottingham is proud of its interdisciplinary approach to research which will continue to see developments in the field of MRI, as well as other key strategic areas of research including nanoscience and technology; regenerative medicine; research into rural life and economy; slavery across the globe and throughout history; and the Water Initiative.

The University of Nottingham has been confirmed in the top 1% of more than seven and a half thousand higher education institutions anywhere in the world. Two prestigious international league tables published for 2007 put Nottingham in the Top 10 of the best in Britain, the Top 25 in Europe, and in the Top 70 worldwide. One of the tables places Nottingham in the World's Top 30 for Clinical Academic Medicine and Pharmacy, and the UK's Top 5. The University is also highly ranked for world class performance in Social Sciences and Agricultural Sciences.

The Times Higher World University Rankings 2007 places The University of Nottingham amongst the very best in the world, in 70th position. More details are available at www.thes.co.uk

In the United Kingdom, league tables for Higher Education Institutions, published by The Guardian, The Times and The Sunday Times, rank Nottingham consistently highly.

The Sunday Times singles out the excellence of Nottingham's teaching, and the fact that its graduates are hot property for the world's top employers. "Nottingham demands high grades from entrants, and in return churns out graduates who are the most sought after, alongside those from Cambridge and Manchester, according to the High Fliers survey for The Times. Nottingham has 33 subjects rated as excellent - an outstanding score. Despite the competition for places, Nottingham recruits from a diverse spectrum.”

The Sunday Times also scores Nottingham amongst the best in the country for sport, and for its extremely high level of student retention."

The Times says “Nottingham is the nearest Britain has to a truly global university.”

The Guardian says "Nottingham is traditionally one of the most popular universities for undergraduate applications. The university offers great facilities and a strong academic record. Its main campuses are only ten minutes away from Nottingham's historic city centre. Popular with overseas students, Nottingham has also established new campuses in Malaysia and China. The Students' Union is one of the largest and most active in the UK, with over 200 societies, sports clubs, student-run services, associations and a variety of social events on offer."

Email ThisBlogThis!Share to TwitterShare to FacebookShare to Pinterest
Labels: UK, University of Nottingham
Newer Post Older Post Home
The roots of education are bitter, but the fruits is sweet ~ Aristotle
Education is the most powerful weapon which you can use to change the world ~ Nelson Mandela
Education is not a preparation for life, Education is life itself ~ John Dewey