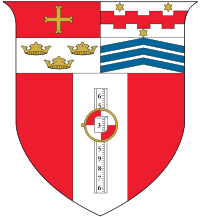 Rensselaer Polytechnic Institute, or RPI, is a private research university located in Troy, New York. RPI was founded in 1824 by Stephen Van Rensselaer for the "application of science to the common purposes of life", and is the oldest technological university in the English-speaking world.The institute is known for its success in the transfer of technology from the laboratory to the marketplace.

RPI's mission has slowly evolved over the years while retaining its focus on the scientific and technological roots upon which the school was founded. Adopted by the Board of Trustees in 1995, RPI's current mission is to "educate the leaders of tomorrow for technologically based careers. We celebrate discovery, and the responsible application of technology, to create knowledge and global prosperity."

Stephen Van Rensselaer established the Rensselaer School November 5, 1824 with a letter to the Rev. Dr. Samuel Blatchford, in which van Rensselaer asked Blatchford to serve as the first president. Within the letter he set down several orders of business. He appointed Amos Eaton as the school's first senior professor and appointed the first board of trustees. On December 29 of that year, the president and the board met and established the methods of instruction, which were rather different from methods employed at other colleges at the time. Students performed experiments, explained their rationale, and gave their own lectures rather than listening to lectures and watching demonstrations.

The school opened on Monday, January 3, 1825 at the Old Bank Place, a building at the north end of Troy.The opening was announced by a notice, signed by the president, and printed in the Troy Sentinel on December 28. The school attracted students from New York, Massachusetts, Vermont, Ohio, and Pennsylvania. The fact that the school attracted students from afar is attributed to the reputation of Eaton. Fourteen months of successful trial led to the incorporation of the school on March 21, 1826 by the State of New York. In its early years, the Rensselaer School had greater resemblance of a graduate school than of a college. It drew graduates of older institutions such as Amherst, Bowdoin, Columbia, Harvard, Penn, Princeton, Union, Wesleyan, Williams, and Yale. Indeed, there was a considerable stream from Yale, where there were several teachers interested in the sciences.

During this period, the Rensselaer School, renamed the Rensselaer Institute in 1832, was a small but vital center for technological research. The first Civil Engineering degrees in the United States were granted by the school in 1835, and many of the best remembered civil engineers of that time graduated from the school. Important visiting scholars included Joseph Henry, who had previously studied under Amos Eaton, and Thomas Davenport, who sold the world's first working electric motor to the institute.

In 1847, alumnus Benjamin Franklin Greene became the new senior professor. Earlier he had done a thorough study of European technical schools to see how Rensselaer could be improved. In 1850 he reorganized the school into a three-year polytechnic institute with six technical schools.In 1861 the name was changed to Rensselaer Polytechnic Institute.

RPI enjoyed a period of academic and resource expansion under the leadership of President Palmer Ricketts. Born in 1856 in Elkton, Maryland, Ricketts came to RPI in 1871 as a student. Named President in 1901, Ricketts liberalized the curriculum by adding the Department of Arts, Science, and Business Administration, in addition to the Graduate School. He also expanded the university’s resources and developed RPI into a true polytechnic institute by increasing the number of degrees offered from two to twelve; these included electrical engineering, mechanical engineering, biology, chemistry, and physics. During Rickett's tenure, enrollment increased from approximately 200 in 1900 to a high of 1700 in 1930.

Another period of expansion occurred following World War II. Enrollment for the 1946 school year was so high that temporary dormitories had to be constructed. Fifty surplus metal military barracks, each housing 20 students, were arranged into a trailer-park like camp over a mile from campus nicknamed "tin town". This arrangement was used by students until new freshman residence halls were opened in 1953. The new dorm complex, affectionately called "Freshman Hill", was subsequently expanded with the Commons Dining Hall in 1954, two more halls in 1958, and three more in 1968, just in time for the baby boomers. The year 1961 saw major progress in academics at the institute with the construction of the Gaerttner Linear Accelerator, then the most powerful in the world, and the Jonsson-Rowland Science Center. In addition to new academic buildings, the growing student body also needed a large dedicated building for the Student Union which was finished in 1967.

In 1999, RPI gained attention when it was one of the first universities to implement a mandatory laptop program. Many saw the program as unnecessary, costly, and rushed into practice too quickly by the administration.However, the program has persisted, and remains an integral part of life at RPI, with many courses requiring that a student bring their laptop to class. 1999 also saw the arrival of President Shirley Ann Jackson.

A graduate of MIT, Dr. Jackson had held physics research positions at Bell Laboratories and Rutgers University, and had most recently served as chairperson for the Nuclear Regulatory Commission. She brought with her the "The Rensselaer Plan" , an ambitious plan to revitalize the institute. Many advances have been made under the plan, and Jackson has enjoyed the ongoing support of the RPI Board of Trustees. However, her leadership style may not sit well with many faculty; on April 26, 2006, RPI faculty voted 155 to 149 against a vote of no-confidence in Jackson.In August 2007, Jackson's administration disbanded the faculty senate and called for a full review of faculty governance, prompting a strong reaction from the Rensselaer community, including faculty petitions against the measure and a faculty hosted "teach in".

On October 4th, 2008, RPI celebrated the grand opening of the $220 million Experimental Media and Performing Arts Center. About two months later, President Jackson announced via email that there would be Institute-wide layoffs due to "the global and national economic crisis, and its impact on endowments."On December 16, 2008, RPI eliminated approximately 100 jobs across the Institute, about five percent of its workforce.

Having nearly two centuries of history and a high tech future in store, the Princeton Review remarks, “Rensselaer Polytechnic Institute is simultaneously the oldest technological school in the country and the most modern school of technology in the U.S. It’s like George Jetson meets Archimedes.”