Professor Paul Ching-wu Chu. is the current president of UST. Its campus is located in Sai Kung District in the New Territories of Hong Kong. Overlooking Clear Water Bay, the school is home to 9,000 students as well as 453 professors.

Since its official opening in 1991, the university has become one of the top universities in Hong Kong and is among the most prestigious in Asia. The Times Higher Education ranked HKUST 53rd worldwide and 17th in technology and admissions is among the most competitive in Hong Kong . The HKUST Business School’s MBA program was ranked first in Asia and 20th worldwide by the EIU.

In the late 1980s the Hong Kong Government anticipated a strong demand for university graduates to fuel an economy increasingly based on services. Chung Sze Yuen and the Governor of Hong Kong, Edward Youde, conceived the idea of another university in Hong Kong. Envisioning the establishment of an internationally competitive university, planning for the Hong Kong University of Science and Technology began in 1986. Construction began at the former British garrison Kohima Camp in Tai Po Tsai on the Clear Water Bay Peninsula. Originally scheduled to finish in 1994, the death of Edward Youde in 1986 led to increased effort and allowed for UST to open its doors early - in 1991.

The project was heavily criticized for surpassing the budget originally set forth by the Hong Kong Government and Royal Hong Kong Jockey Club. However, under the fund raising efforts of its Vice-Chancellor at the time, Woo Chia-wei, the first students enrolled in October 1991. By 1992, accommodation as well as athletic facilities were expanded to support about 7,000 students. Several more expansion projects such as the construction of the HKUST Enterprise Centre have since been completed and current efforts include the expansion of housing facilities scheduled for completion for 2009.
Faculty

The Hong Kong University of Science and Technology awards degrees in five schools organized under the Academic Affairs branch of the University. The Schools of Science, Engineering, and Business and Management offer undergraduate and postgraduate programs through to the doctorate. The School of Humanities and Social Science provides general education for all undergraduates and enrolls graduate students up to the doctoral level.

School of Science
• Biochemistry
• Biology
• Chemistry
• Mathematics
• Physics
(with the option of complementing with education in the Chemistry, Mathematics and Physics program)

The university campus occupies a 60 hectares (0.60 km²) site which is divided into a several sections: the Academic Building, S.H. Ho Sports Hall, student halls, outdoor sports facilities, the University Centre, apartments, staff quarters and the President's Lodge. Being constructed along the slope of the surrounding hills, beautiful Port Shelter is clearly visible from virtually every building on campus. Arranged in cascades, the buildings are connected by walkways and several balconies thus offer a spectacular view of the South China Sea. 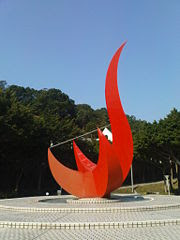 The Kellog-HKUST EMBA program has been ranked No.1 by the Financial Times and this has boosted their momentum for further achievement.