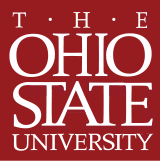 Ohio State is currently ranked by U.S. News & World Report as the best public university in Ohio, among the top 60 universities in the United States, and among the top 20 public universities in the United States. Ohio State has been officially designated as the flagship institution of the state's public system of higher educationby the newly centralized University System of Ohio.

The Ohio State University was founded in 1870 as a land-grant university in accordance with the Morrill Act of 1862 under the name of the Ohio Agricultural and Mechanical College. The school was originally situated within a farming community located on the northern edge of Columbus. While some interests in the state had hoped that the new university would focus on matriculating students of various agricultural and mechanical disciplines, Governor Rutherford B. Hayes foresaw a more classic, comprehensive university and manipulated both the university's location and its initial board of trustees towards that end. Later that year, the university welcomed its first class of twenty-four students. In 1878, and in light of its expanded focus, the college permanently changed its name to the now-familiar "The Ohio State University" (with the article "The" as part of its official name).

Ohio State began accepting graduate students in the 1880s, and, in 1891, the school saw the founding of its law school. It would later acquire colleges of medicine, dentistry, commerce and journalism in subsequent years. 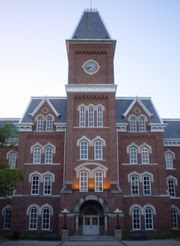 Although development had been hindered in the 1870s by hostility from the state's agricultural interests and competition for resources from Miami University and Ohio University, both issues were eventually resolved. In 1906, Ohio State's status as the state's flagship campus was written into law by the Ohio legislature through the Eagleson Bill. In 1916, Ohio State was elected into membership in the Association of American Universities.

The Ohio State University comprises the following colleges and schools:

The Lombardi Program on Measuring University Performance at Arizona State University detailed analysis and rankings of American universities currently places Ohio State as the 24th ranked university in America, the 10th ranked public university in America and the top overall university in Ohio. Of their nine ranking criteria, Ohio State ranked in the top-25 in four categories and between 26-50 in an additional four categories. The Washington Monthly college rankings which seek to evaluate colleges' contributions to American society based on factors of social mobility, cutting edge research and service to the country by their graduates currently places Ohio State as 12th in the nation and 10th among public universities.

Ohio State is also the only public university in Ohio to which the Carnegie Foundation for the Advancement of Teaching has given both its highest overall classification of Doctoral/Very High Research Activity and highest undergraduate admissions classification of more selective.

The Ohio State University is accredited by the Higher Learning Commission (HLC) of the North Central Association of Colleges and Schools (NCA).