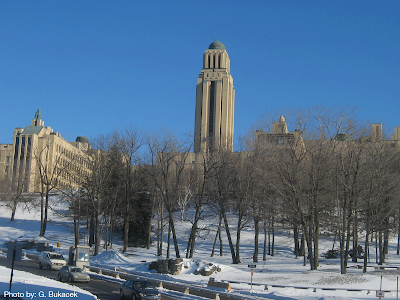 Situated on the northern slope of Mount Royal, the Université de Montréal boasts an exceptional natural setting. Combining green space and modern architecture, the campus is steeped in the great tradition of North American universities. With over 30 buildings, some of which are connected by an underground network, the campus is dominated by the majestic Art-Deco tower of the Roger Gaudry Building-a distinctive feature of Montreal's unique silhouette. Côte des Neiges, one of the city's most cosmopolitan and vibrant districts, offers the university community a wide range of shops and services, including a cultural centre, bookstores, boutiques, restaurants and cafes.

A variety of innovative programs
With its 13 faculties and 80 departments and schools, the Université de Montréal offers programs in almost all academic fields. UdeM is the only Quebec university that teaches the full range of disciplines in health sciences, boasts the province's only faculty of veterinary medicine and houses one of Canada's largest faculty of arts and sciences. Whether you have a passion for international politics, cyberspace law, Asian social history or nanotechnologies, you'll find a department that best suits your needs. Flexible and varied, our programs include many bi-disciplinary bachelor degrees; this would give you access to master's programs in two disciplines, such as communications and politics, or physics and information technology.

A leader in research
The Université de Montréal is one of Canada's major research centres. With its two affiliated schools-the École Polytechnique and the HEC Montréal-and its network of affiliated hospitals, it brings together 2,300 professors and researchers from all the fundamental disciplines, some 300 research units, and one of Canada's largest student bodies at the master's and doctoral levels. The University earmarks close to $400 million for basic and applied research each year, making it Canada's second most active university in the field. At UdeM, students launch into a unique scientific adventure, working alongside internationally renowned specialists and participating in exciting new breakthroughs.

Libraries Network
Some two and a half million books, two million audiovisual documents, 45,000 periodicals and 450 computer stations make up the Université de Montréal's library resources available to users throughout the campus. UdeM's 18 libraries, which are all specialized as well as complimentary to one another, are linked by Atrium, a computerized catalogue that helps students quickly locate documents and avoid needless running around. The arts and humanities library located in the Samuel Bronfman Building is UdeM's largest library in terms of the number of publications and users, and houses the University's well-conserved rare books and equally rich collection of archives. 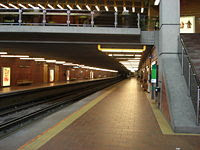 Physical education
The Université de Montréal boasts one of Quebec's largest sports complexes. Open to the university community and the general public, CEPSUM offers users of all ages an impressive sports facility: indoor pool and rink, training room, racquetball courts, gyms, indoor track, stadium and outdoor field. Each season offers members and non-members a full range of activities for adults and children alike: swimming, gymnastics, aerobics, team sports and more. CEPSUM is also proud of its outstanding sports teams, the Carabins It's pretty much everything you need to get into shape for exam period!

A thriving musical hub
For musicians and music lovers alike, UdeM is tuned in to Montreal's music scene. It has one of Canada's most vibrant faculties of music and organizes over 500 public events which attract over 100,000 people each year. The Faculty's talented professors and students play in a variety of musical genres, from the Baroque period to contemporary composers; jazz, calypso, opera and Gregorian chant can all be heard through the faculty's halls. One of Quebec's only true concert halls dedicated exclusively to musical performance, the Salle Claude-Champagne also serves as a creative piazza for various musical groups, including the Nouvel Ensemble Moderne and the Atelier de musique contemporaine. 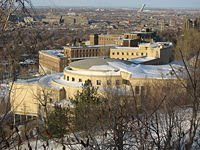 An international community
With over 5,000 foreign students enrolled last year, UdeM is considered one of Canada's most cosmopolitan universities. Its foreign student office (Bureau des étudiants internationaux) provides guidance and information to foreign students, while English-speaking students from other Canadian provinces receive help and advice from the coordinator of the Anglophone Student Support Program. UdeM students who wish to complete their education abroad can obtain information at the Maison internationale on our many exchange programs with universities around the world.

Brief history
The Université de Montréal first opened its doors on January 6th, 1878. At the time, less than a hundred students were admitted to three faculties-theology, law and medicine-in various locations around the city. In 1895, new premises were acquired on Saint Denis St., in the heart of the Latin Quarter, and all of its faculties were moved to one location.

Formerly a branch of the Université Laval de Québec, the Université de Montréal officially became a self-governing and independent institution on May 8th, 1919. With its affiliated schools (the École Polytechnique, founded in 1873 and affiliated in 1887, and the École des Hautes Études Commerciales, founded in 1907 and affiliated in 1915), it became for Montreal a prestigious and much-awaited Francophone university.

After a fire destroyed the facilities on Saint Denis St., Ernest Cormier was commissioned to design the plans for a new campus on the north side of Mount Royal. In 1926, he unveiled the result of all his hard work-a modern institution in the Art Deco style characterized by simplicity of form.

The University was hit hard by the Depression of the 1930s. Construction halted for a decade, and the University almost closed is doors. It survived this dark period, however, and in 1943 the Université de Montréal inaugurated its new campus, 15 years after construction had first began.

In 1965, during the Quiet Revolution, the appointment of Roger Gaudry, the first secular rector, paved the way for modernization and the University took a decisive step in higher education and research. During the 1980s, the Université de Montréal carved out a place for itself on the international stage and became one of the world's top institutions of higher learning.

In 2002, the University embarked on its largest construction projects since the late '60s. Financed by public and private fundraising, the project involves the construction of five ultra-modern buildings for advanced research and teaching in the fields of pharmacology, engineering, aerospace, cancer research and biotechnology. Once this ambitious project is completed, the University will be poised to rise to the challenges facing the world of knowledge over the next 40 years.

Today University of Montreal has 13 faculties:
In today's context of globalization and the global village, the Université de Montréal is a link between North America and Europe. Situated at the crossroads of the English and French worlds, it offers students academic training with a global perspective in fields of advanced research, with a skilled staff of professors and researchers, many of whom have trained abroad.

A Francophone university deeply rooted in Montreal and Quebec, the Université de Montréal has made internationalization a top priority in all of its activities. In addition to signing collaborative scientific agreements with university institutions in Canada and abroad, it works closely with over 50 countries around the world and receives some 4,000 foreign students each year from over a hundred countries.

The Université de Montréal's presence on the international stage has led to its participation in many research projects outside Canada. Its international presence is also apparent within the walls of the University where foreign professors nourish UdeM's cultural and intellectual diversity and enrich its knowledge of the world.

Email ThisBlogThis!Share to TwitterShare to FacebookShare to Pinterest
Labels: Canada, University of Montreal

With some exceptions, students will find poorly maintained facilities, crumbling buildings, inadequate IT services, obsolete libraries, and an aging and frustrated staff due to lack of funds and deficits. Although the Law Faculty and some pharma-medical programs are good (in fact, the Faculty of Law remains the only serious French-speaking option for whoever wishes to join the best attorneys here), other programs are questionable.
Still, should you wish to stay and live in aging Quebec, its nice location and neighborhood make it a first choice in this part of the country.