The École polytechnique (the “Polytechnic School”), often referred to by the nickname X, is the foremost French grande école of engineering (according to French and international rankings).
History
Founded in 1794, the École Polytechnique, a state supported institution of higher education and research, is the most prestigious engineering Grande Ecole in France. The École trains the scientific, industrial and economic elite of the nation.

Exceptional scientists, many of whose names are now attached to fundamental laws and concepts, have walked its halls as students or professors over the last two centuries.

~ 1794 Creation of the Ecole Polytechnique, by Carnot and Monge
~ 1805 Napoleon settles the Ecole at Montagne Sainte Genevieve, downtown Paris as a military Academy and gives its motto "Pour la patrie, les sciences et la gloire".
~ 1914 The Ecole's flag receives the Legion of Honor, for its contribution to the Victory
~ 1970 the Ecole becomes a state supported civilian institution, under the auspice of the Minister of Defense.
~ 1972 the first female enters the Ecole
~ 1976 the Ecole moves to Palaiseau (15 miles off Paris)
~ 1994 celebration of the bicentennial chaired by President Mitterand
~ 2000 a new cursus is set in place, passing to 4 years and reforming the curriculum.

Today the Ecole has :
~ 1902 students in the "Polytechnicien" cursus of 4 years
~ 330 students in the doctoral school
~ 380 professors
~ 10 departments and 21 laboratories
~ is settled on a campus covering 445 acres and about 3200 people
The admission to École polytechnique in polytechnicien cycle is made through a selective entrance examination, and requires at least two years of preparation after high school in Classes Préparatoires. Admission includes a week of written examinations, during Spring, followed by oral examinations which are handled in batches (séries) spanning over Summer. 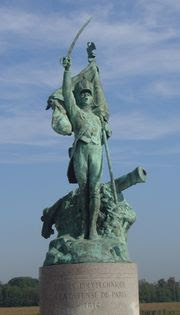 Statue to commemorate the cadets of polytechinque
About 400 French students are admitted each year. Foreign students (known as EV1) having followed a classe préparatoire curriculum (generally, French residents or students from former French colonies in North Africa) can also enter through the same competitive exam. Foreign students can also apply through a “second track” (EV2) following undergraduate studies; there are about 100 of them each year, most of which come from Morocco, Tunisia, Brazil, Chile, Ecuador, China, Vietnam, Iran, Romania and Russia but some also from Québec. Finally, some foreign students come for a single year from institutions such as MIT.

Grades of the “common trunk” of the curriculum are used to rank the students. Traditionally, this exit ranking of the school had a very high importance, and some peculiarities of the organizations of studies and grading can be traced to the need for a fair playing ground between students.

For French nationals, the ranking is actually part of a government recruitment program: a certain number of seats in civil or military Corps, including elite civil servant Corps such as the Corps des Mines, are open to the student body each year. At some point in the scolarity, students specify a list of Corps that they would like to enter in order of preference, and they are enrolled into the highest one according to their ranking.

Since the X2000 reform, the importance of the ranking has lessened. Except for the Corps curricula, universities and schools where the Polytechniciens complete their formations now base themselves on transcripts of all grades.

The school also has a Ph.D. program open to students with a master's degree or equivalent. Ph.D. students generally work in the laboratories of the school; they may also be working in external institutes or schools that cannot, or will not, grant doctorates.

About 50% of Master's students and 35% of Ph.D. students at the École polytechnique are non-nationals.