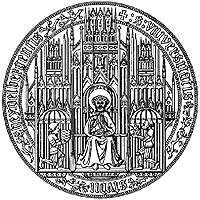 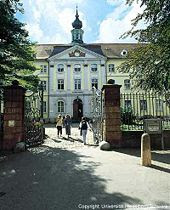 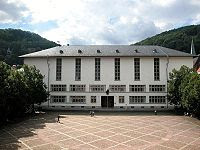 Rupert I, Elector Palatine established the university in 1386 in the town of Heidelberg, then the seat of Prince-Electors of the Holy Roman Empire. It acted from the outset as a center for theologians and law experts from throughout the Holy Roman Empire. After having gone into decline as a result of the Thirty Years' War (1618-1648), it overcame its fiscal and intellectual crisis not until the early 19th century. It then became a hub for independent thinkers and developed into a stronghold of humanism and democracy. However, during the Nazi era between 1933 and 1945, the university lost many of its dissident professors and was consequently ill-famed as a NSDAP cadre university. It thus underwent an extensive denazification after World War II. In the 1970s, the University of Heidelberg was one of the main scenes of the left-wing student protests in Germany. 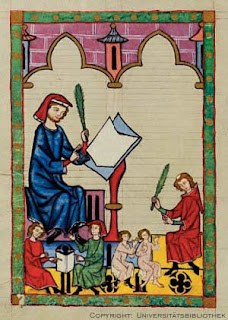 Today, the university puts an emphasis on natural sciences and medicine, but it retains its traditions with strong faculties of humanities and social sciences. The university is closely associated with some of the foremost science institutes in Europe and is particularly research oriented.It is consistently ranked among Europe's top universities, and it is one of the internationally leading education venues for doctoral students, with approximately 1,000 doctorates successfully completed every year.Although there is an increasing number of commercial sponsors, the university depends mostly on financial support by the state. International students from some 130 countries usually account for more than 20 percent of the entire student body;at some graduate programs the proportion of international students approaches 50 percent. 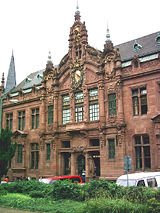 The University Library is the main library of the university, and constitutes together with the decentralized libraries of the faculties and institutes the integral university library system, headed by the director of the University Library. Besides the usual tasks of a library for research and teaching, the University Library contains special collections in the following concentration areas: literature concerning the Palatinate and Baden, Egyptology, archeology, history of art, and South Asia. The University Library's stocks exceeded one million in 1934. Today it holds about 3.2 million books, about 500,000 other media like microfilms and video tapes, 10,732 current scientific journals, as well as 6000 ancient manuscripts. The 83 decentralized libraries contain another 3.5 million printed books. In 2005, 34,500 active users of the University Library accessed 1.4 million books a year. The conventional book supply is complemented by numerous electronic services. Around 3000 commercial scientific journals can be accessed via e-journal. 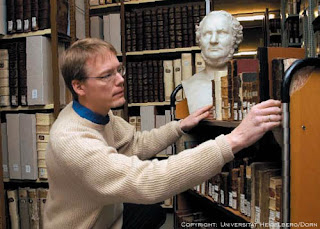 The University Library of today traces its roots back to the purchase of a chest of documents by the first Rector Marsilius von Inghen in 1388, which was stored in the Heiliggeistkirche, then the University Cathedral. Additional foundations of the library were laid by means of donations from the bishops, chancellors, and early professors. Louis III willed his large and valuable collection to the university, as did also the Fugger of Augsburg. Otto Henry, Elector Palatine, combined the university's libraries in the 16th century, thus creating the Bibliotheca Palatina. In the 17th century, the greatest part of the Bibliotheca Palatina was donated to the Vatican in Rome as a loot of the Thirty Years War. The libraries of the secularized monasteries Salem and Petershausen constituted the basis for the reconstruction. From 1901 to 1905 a richly ornamented, four-wing red sandstone building was constructed for the library across from the Church of St. Peter. It was designed by Josef Durm, who adapted the Renaissance style of Heidelberg Castle and added numerous elements of art noveau. The building was expanded several times, lately by enlarged basements under the courtyard of the neighboring New University. The frontage is punctuated with many windows for the sake of natural illumination. Since 1978, the science branch of the University Library serves the institutes of natural sciences and medicine at the New Campus. 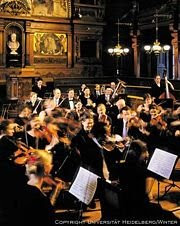 After a structural reformation in 2003, the university consists of twelve faculties which in turn comprise several disciplines. 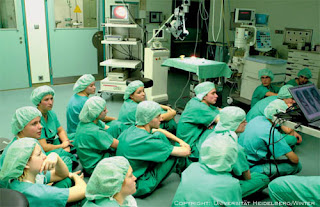 As a consequence of the Bologna process, most faculties now offer Bachelor's, Master's, and PhD degrees in order to comply with the new European degree standard. 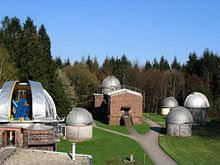 Organization and length of courses

Main auditorium in the New University

The academic year is divided into two semesters. The winter semester runs from 1st of October - 31st of March and the summer semester from 1st of April - 30th of September. Classes are held from mid-October to mid-February and mid-April to mid-July. Students can generally begin their studies either in the winter or the summer semester. However, there are several subjects students can begin only in the winter semester. The standard time required to finish a Bachelor's degree is principally 6 semesters, and a further 4 semesters for consecutive Master's degrees. The normal duration of PhD programs for full-time students is 6 semesters. The overall period of study for an undergraduate degree is divided into two parts: a period of basic study, lasting at least 4 semesters, at the end of which students must sit a formal examination, and a period of advanced study, lasting at least 2 semesters, after which students take their final examinations.

The THES - QS World University Rankings ranked the University of Heidelberg overall between 12th and 15th in Europe, between 45th and 60th in the world, and consistently as the foremost German university. Based on the overall academic peer review score of 2005, Heidelberg ranked 6th in Europe and 28th in the world. In the separate THES - QS rankings of broad subject areas, Heidelberg ranked globally between 17th and 43rd in life science and biomedicine, between 22nd and 45th in science, between 41st and 61st in arts and humanities, and between 54th and 78th in social sciences. The Shanghai Jiao Tong University's Academic Ranking of World Universities ranked Heidelberg between 12th and 18th in Europe, and between 58th and 66th in the world. With these placings Heidelberg outranks many world-renowned institutions of higher education, such as most often two Ivy League universities. (Note that the THES - QS and Jiao Tong tables are the only annual comprehensive world university rankings, and that their methodologies are subject to controversy.)

According to the Ranking of Scientific Impact of Leading European Research Universities compiled by the European Commission, Heidelberg ranks 9th in Europe. The CHE Excellence Ranking, measuring academic performance of European graduate programs in biology, chemistry, mathematics, and physics, placed Heidelberg in the excellence group for physics and chemistry, and in the top group for mathematics and biology, which is overall a joint 9th place in Europe. 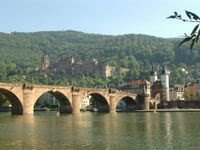 Ranked by the number of Nobel Laureates affiliated with the university at the time of Nobel Prize announcement, Heidelberg is placed 4th in Europe and 13th in the world by 2007. A study based on a survey of scientific journal referees created by Braun et al. in 2007 ranks the University of Heidelberg at the top of German universities in academic reputation.The Times referred to the University of Heidelberg as "the oldest and most eminent in the country of Luther and Einstein" and as "the jewel of German learning". 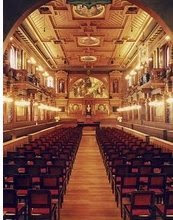