The Kellogg School of Management, Medill School of Journalism, Feinberg School of Medicine, McCormick School of Engineering and Applied Science, School of Communication, School of Education and Social Policy, and School of Law are often ranked highly in their respective fields.

Student enrollments include approximately 7,800 undergraduate and 6,300 graduate students. Northwestern competes in the NCAA's Division I and is a founding member of the Big Ten Conference.
History
Founded in 1851 by Methodists from Chicago (including John Evans, after whom Evanston is named), Northwestern opened in Evanston in 1855 with two faculty members and ten students. The school’s nine founders, all of who were Methodists (three of them ministers), knelt in prayer and worship before launching their first organizational meeting. 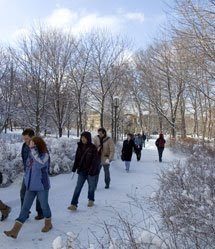 The University's name, Northwestern, came from its founders' desire to serve citizens of the states that occupied the area of the former Northwest Territory: Ohio, Indiana, Illinois, Michigan, Wisconsin, and part of Minnesota. The original Evanston campus in 1855 consisted of only one building, a temporary structure called "Old College." University Hall, the first permanent building, was constructed in 1869. Northwestern built a campus in Chicago for the schools of law, medicine, and business in the 1920s.

The phrase on Northwestern's seal is Quaecumque sunt vera -- in Latin, "Whatsoever things are true" from Philippians 4:8. Also on Northwestern's seal, a Greek phrase inscribed on the pages of an open book: ho logos pleres charitos kai aletheias, which translates as "The Word... full of grace and truth." This phrase comes from the Gospel of John 1:14: "And the Word was made flesh, and dwelt among us, and we behold His glory, and the glory was of the only begotten of the Father, full of grace and truth." Both the Latin and Greek phrases express the values of the University's founders, and recall Northwestern's Methodist heritage. 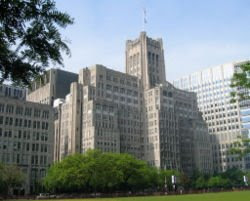 Northwestern's founding charter granted the school a permanent exemption from paying property taxes. For this reason, Northwestern has often endured a difficult relationship with Evanston's government. Tensions have arisen regarding building codes, law enforcement, and politics. Recently, factions of Evanston's government have attempted to divide Northwestern's campus into several different wards, so as to reduce students' voting potency.

Today Northwestern is a major private research university located on lakefront campuses in Evanston and Chicago. Approximately 2,300 full-time faculty teach 13,500 full-time students, 7,700 of whom are undergraduates. 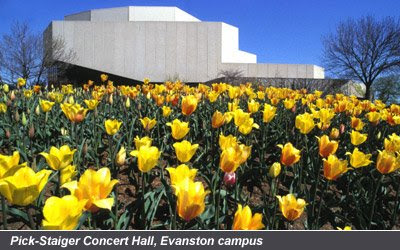 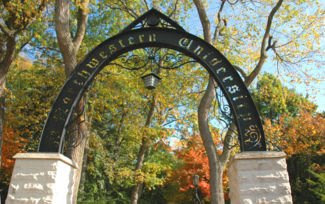 The median secondary school ranking of the students in the current freshman class is in the 96th percentile. Moreover, the median combined score of the Scholastic Aptitude Test for the class as a whole is approximately 1400. More than 40 percent of the freshman class was recognized by the National Merit Corporation for distinguished academic achievement.
The Northwestern student body ranks among the top 15 schools nationally in the number of National Merit and National Achievement scholars. About one-third of the freshman class received some form of advanced placement upon entrance. 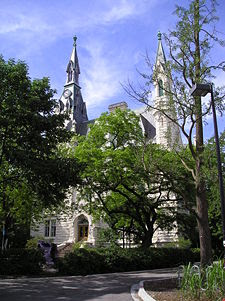 Although its primary function is academic, the University also provides a special kind of community within the cities of Evanston and Chicago. Cultural, social, and athletic events are available on campus. Extensive nonacademic programming is offered through Norris University Center, the residential colleges, and various residential groups. The fine and performing arts complex further enriches the Northwestern environment.