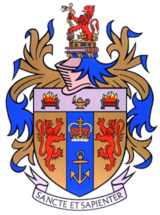 King’s College London is one of England’s oldest and most prestigious university institutions: a multi-faculty research-led university college based in the heart of London with over 19,700 students, of whom more than 6,200 are postgraduates. It is ranked as one of the world’s top 25 universities. 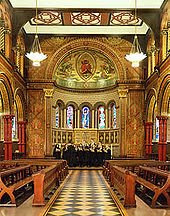 The College offers an intellectually rigorous environment supported by welcoming and caring traditions. King’s has played a major role in many of the advances that have shaped modern life, such as the discovery of the structure of DNA, and it is now the largest centre for the education of doctors, dentists and other healthcare professionals in Europe and home to five Medical Research Council centres.

History
King's College London, so named to indicate the patronage of George IV, was founded in 1829 in response to the founding of "London University", latterly known as University College, London (UCL), in 1826. UCL was founded, with the backing of Jews, Utilitarians and non-Anglican Christians, as a secular institution, intended to educate "the youth of our middling rich people between the ages of 15 or 16 and 20 or later". The need for such an institution was due to the religious nature of the Universities of Cambridge and Oxford, which then educated solely the sons of wealthy Anglicans.

The foundation of UCL met with the disapproval of the British establishment, indeed, "the storms of opposition which raged around it threatened to crush every spark of vital energy which remained". 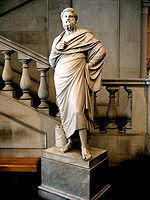 The Rev. Dr. George D'Oyly, rector of Lambeth and governor of Wilson's School in Camberwell, opposing the secular nature of the college, published an open letter proposing the formation of a competing institution. This would be of a religious, and more particularly Anglican, nature, one which would instil, "the services of religion ... performed as directed in our National Church". 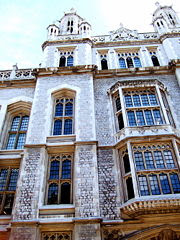 This prompted the Duke of Wellington, then Prime Minister to chair a public meeting which launched King's on 21 June 1828. His simultaneous support for the Anglican college and the Roman Catholic Relief Act, which was to lead to the granting of almost full civil rights to Catholics, was challenged by the Earl of Winchelsea in early 1829. The result was a duel in Battersea Fields on 21 March that year. Deliberately off-target shots were fired by both and neither was hurt.This Duel Day is still celebrated on that day in March every year, marked by various events throughout the College.

King's opened in 1831. Despite the intentions of its founders and the chapel at its heart of the buildings, the initial prospectus permitted, "nonconformists of all sorts to enter the college freely". Chemistry, English literature and commerce were among the subjects offered.

At this time, neither King's, nor "London University" had the ability to confer degrees, a particular problem for medical students who wished to practice. Amending this situation was aided by the appointment of Henry Brougham as Lord Chancellor, who was chairman of the governors of "London University". In this position he automatically became a governor of King's College. In the understanding that the government was unlikely to grant degree-awarding powers on two institutions in London, negotiations led to the colleges federating as the "University of London" in 1836, "London University" thus being demoted to the lower status of University College. 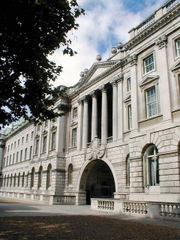 King's professors played a part in scientific and social advances of the nineteenth century, through extending higher education to women, the working class, and by offering evening classes. Perhaps the most famous scholarly research performed at King's was the work by Rosalind Franklin and Maurice Wilkins that was essential to the discovery by James D. Watson and Francis Crick of the structure of DNA.

The first qualification issued by King's was the Associate of King's College, or AKC. The course, which concerns questions of ethics and theology, is still awarded today to students (and staff) who take an optional three year course alongside their standard degree. Successful completion entitles the graduate to bear the letters AKC after their name.

The College today is the product of mergers with a number of other institutions over the years, including Queen Elizabeth College, Chelsea College, the Institute of Psychiatry, and the United Medical and Dental Schools of Guy's and St Thomas' Hospitals. Florence Nightingale's original training school for nurses is now incorporated as the Florence Nightingale School of Nursing and Midwifery. Today, there are nine schools of study. 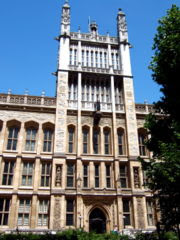 In 2003, the College was granted degree-awarding powers in its own right (rather than degrees awarded by the University of London) by the Privy Council. This power remained unexercised until 2007, when the College announced that all students starting courses from September 2007 onwards would be awarded degrees conferred by King's itself, rather than the University. However, the new certificate will still make reference to the fact that the College is a constituent of the University of London. All current students with at least one year of study remaining were in August 2007 offered the option of choosing to be awarded a London degree or a King's degree.
Academics
The nine Schools of study at King's are as follows:
Dental Institute
Institute of Psychiatry
School of Biomedical & Health Sciences
School of Humanities
School of Law
School of Medicine
Florence Nightingale School of Nursing & Midwifery
School of Physical Sciences & Engineering
School of Social Science & Public Policy
University Metrics' Global University Rankings, based on a new ranking methodology called "G-Factor", placed King's 5th in the UK and 32nd in the world According to the 2006 Times Good University Guide, several subjects taught at King’s, including Music, Dentistry, History, American Studies, Philosophy and Classics, are among the top five in the country.

The College has had 24 of its subject-areas awarded the highest rating of 5 or 5* for research quality, demonstrating excellence at an international level, and in 2007 it received a good result in its audit by the Quality Assurance Agency. It is in the top tier for research earnings.