IU has 110 academic programs ranked in the nation's top 20. Twenty-nine graduate programs and four colleges at Indiana University are ranked among the top 25 in the country in the U.S. News & World Report's Best Graduate Schools 2001-2002. Time magazine named Indiana University its "2001 College of the Year" among major research universities. Indiana is one of 60 members of the Association of American Universities, the leading American research universities. The university's intercollegiate athletic program boasts 25 national championship teams (including seven in soccer, six in swimming and five in basketball) and 133 individual national championships (including 79 in swimming and 31 in track and field).

Indiana's state government in Corydon founded Indiana University in 1820 as the "State Seminary". It was originally located at what is now called Seminary Square Park near the intersection of Second Street and College Avenue. 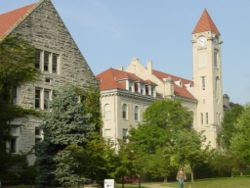 The 1816 Indiana state constitution required that the General Assembly (Indiana's state legislature) create a "general system of education, ascending in a regular gradation, from township schools to a state university, wherein tuition shall be gratis, and equally open to all." It took some time for the legislature to fulfill its promise, partly due to a debate regarding whether the Indiana Territory's land-grant public university—what is now Vincennes University—should be adopted as the State of Indiana's public university or whether a new public university should be founded in Bloomington to replace the territorial university. While the original state-issued legislative charter for IUB was granted in 1820, construction began in 1822; the first professor was hired in 1823; classes were offered in 1824. The first class graduated in 1830.

Throughout this period and until the rechartering of Vincennes University from a four-year institution to a two-year institution in 1889, a legal-cum-political battle was fought between the territorial-chartered public university in Vincennes and the State of Indiana on behalf of the state-chartered public university in Bloomington, including the legal case (Trustees for Vincennes University v Indiana, 1853) which was appealed to the Supreme Court of the United States. 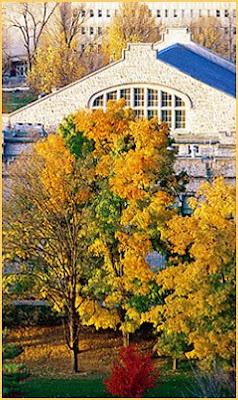 Wylie's death in 1851 marks the end of the university's first period of development. IU now had nearly a hundred students and seven professors. Despite the university's more obviously secular purpose, presidents and professors were still expected to set a moral example for their charges. It was only in 1885 that a non-clergyman, biologist David Starr Jordan, became president.

Between Wylie and Jordan's administrations, the University grew slowly. Few changes rocked the university's repose. One development is interesting to modern scholars: the college admitted its first woman student, Sarah Parke Morrison in 1867, making IU the one of the first state universities to admit women on an equal basis with men. Morrison went on to become the first female professor at IU in 1873.

In 1883, IU awarded its first Ph.D. and played its first intercollegiate sport, baseball, prefiguring the school's future status as a major research institution and a power in collegiate athletics. But another incident that year was far more important to the university: the university's original campus in Seminary Square near the center of Bloomington burned to the ground. Instead of rebuilding in Seminary Square, as had been the practice following previous blazes, the college was rebuilt between 1884 and 1908 at the far eastern edge of Bloomington. (Today, Bloomington has expanded eastward, and the "new" campus is once again at the center of the city.)

The first extension office of IU was opened in Indianapolis in 1916. In 1920/1921 the School of Music and the School of Commerce and Finance (what later became the Kelley School of Business) were opened. In the 1940s Indiana University opened extension campuses in Kokomo and Fort Wayne. The controversial Kinsey Institute for sexual research was established in 1947. 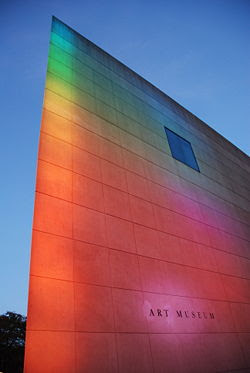 The schools are degree-granting units made up of smaller departments and programs. IU's schools are some of the best in their areas of expertise, with world-renowned faculty and cutting-edge facilities.