Cardiff University (Welsh: Prifysgol Caerdydd) is a leading university located in the Cathays Park area of Cardiff, Wales, United Kingdom. It received its Royal charter in 1883 and is a member of the Russell Group of Universities. It has an annual turnover of £315 million. The university was shortlisted for the Sunday Times University of the Year award in 2003. Before August 2004, the university was officially known as University of Wales, Cardiff (Welsh: Prifysgol Cymru, Caerdydd), although it used the name Cardiff University publicly. The student population is diverse with 17% of students from outside of the United Kingdom and 85% of students from state schools.

The University's breadth of expertise in research and research-led teaching encompasses: the humanities; the natural, physical, health, life and social sciences; engineering and technology; preparation for a wide range of professions; and a longstanding commitment to lifelong learning. 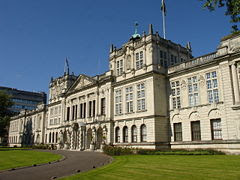 From its outstanding central location amidst the parks, Portland-stone buildings and tree-lined avenues that form the city's elegant civic centre, the University's students and staff are drawn from throughout the world, attracted by its international reputation and commitment to innovation and excellence in all areas of activity. Cardiff is a member of the Russell Group of Britain's leading research universities.

Having gained national and international standing, Cardiff University's vision is to be recognised as a world-leading university and to achieve the associated benefits for its students, staff and all other stakeholders.

The student population is drawn from a variety of backgrounds, with students attracted from throughout Wales, the rest of the UK and world-wide. International students comprise some 17 per cent of the total student population. Government performance indicators show that our students are more likely to succeed in their studies, with first-year completion rates considerably higher than national averages and also higher than some similar universities.

Many of the University’s degree schemes provide partial or complete exemption from relevant professional examinations and more than forty schemes of study benefit from accreditation and input from professional bodies. More than twenty per cent of Cardiff University students pursue postgraduate study.

To be among the very best in the world is the most challenging goal we can set ourselves. We have done so because it is only through working to achieve the very highest international standards in research, teaching and other activities that we can realise the full potential of the academic community that is Cardiff University. Our vision reflects our service to society and we pursue our vision in the belief that all those with an interest in the University should expect no lesser ambition.

Our Mission is to pursue research, learning and teaching of international distinction and impact.

Features of our Vision and Mission are a striving for excellence, integrity and innovation in every aspect of activity; a strongly collaborative approach; open and effective communications and an inclusive culture based on dignity, courtesy and respect. 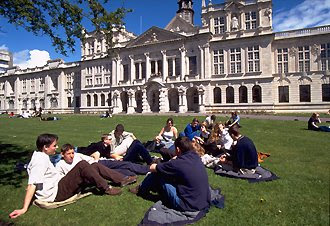 In 1885, Aberdare Hall opened as the first hall of residence, allowing women access to the university. This moved to its current site in 1895, but remains a single-sex hall. 1904 saw the appointment of the first female professor in the UK, Millicent McKenzie.

In 1931, the School of Medicine, which had been founded as part of the College in 1893 when the Departments of Anatomy, Physiology, Pathology, Pharmacology were founded, was split off to form the University of Wales College of Medicine. In 1972, the College was renamed University College, Cardiff.

In the early 1990s, the university's computer systems served as the home for The Internet Movie Database. In 1997, the College was granted full independent degree awarding-powers by the Privy Council (though, as a member of the University of Wales it could not begin using them) and in 1999 the public name of the university was changed to Cardiff University. Some considered this part of an effort at Cardiff to set itself apart from the other colleges of the University of Wales, none of which are members of the Russell Group.

In 2002, ideas were floated to re-merge Cardiff with the University of Wales College of Medicine following the publication of the Welsh Assembly Government's review of higher education in Wales. This merger became effective on August 1, 2004, on which date Cardiff University ceased to be a constituent institution of the University of Wales and became an independent "link institution" affiliated to the federal University. The process of the merger was completed on December 1, 2004 when the Act of Parliament transferring UWCM's assets to Cardiff University received Royal Assent. On December 17 it was announced that the Privy Council had given approval to the new Supplemental Charter and had granted university status to Cardiff, legally changing the name of the institution to Cardiff University. Cardiff awarded University of Wales degrees to students admitted before 2005, but these have been replaced by Cardiff degrees. Medicine, dentistry and other health-related areas began to admit students for Cardiff degrees in 2006. 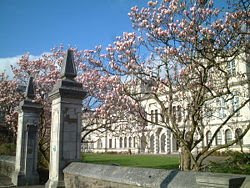 In 2004, Cardiff University and the University of Wales, Swansea entered a partnership to provide a four-year graduate-entry medical degree. An annual intake of around 70 post-graduate students undertake an accelerated version of the Cardiff course at the University of Wales, Swansea for the first two years before joining undergraduate students at Cardiff for the final two years. All medicine/surgery graduates are awarded the degrees MB BCh.

In 2005, The Wales College of Medicine, which is part of the University, launched the North Wales Clinical School in Wrexham in collaboration with the North East Wales Institute of Higher Education in Wrexham and the University of Wales, Bangor and with the National Health Service in Wales. This has been funded with £12.5 Million from the Welsh Assembly and will lead to the tripling of the number of trainee doctors in clinical training in Wales over a four year period. 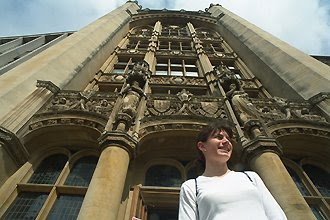 The university has a rivalry with nearby Swansea University, against whom every year they have a varsity match termed the Welsh Varsity.


College of Humanities and Sciences 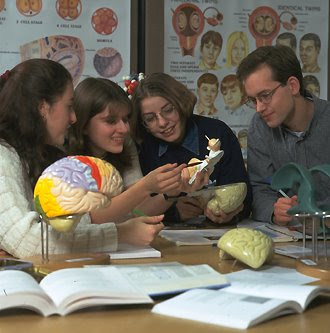 
The Good University Guide 2009
Ranked 37th overall out of 113 universities in the institution-wide league table.
Ranked 17th out of 109 universities for business studies.


The Guardian University Guide 2009
Ranked 33th overall out of 149 universities in the institution-wide league table.
Ranked 38th out of 140 universities for business and management studies


The Sunday Times University Guide 2009
Ranked 28th out of 123 universities overall in the institution-wide league table. 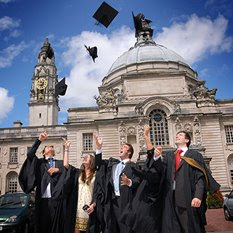