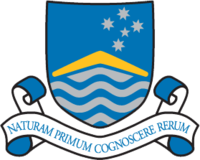 The Australian National University, commonly abbreviated to ANU, is a public research university situated in Canberra, Australia. It was established by an act of the Parliament of Australia on 1 August 1946, with the legislated purpose of conducting and promoting research in Australia. 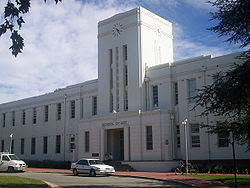 The university is a member of several university alliances and cooperative networks, including the Group of Eight (Australian Universities), the Association of Pacific Rim Universities, the Association of Universities for Research in Astronomy and the International Alliance of Research Universities. The University consistently ranks highly on several international surveys, including the Newsweek Top 100 and the annual Times Higher Education Supplement rankings. Its notable staff and alumni include five Nobel laureates. The University is governed by a 15-member council.
History
The ANU is the only Australian university to be established by an act of federal Parliament. The Australian National University Act 1946-47 was introduced into parliament by the then Prime Minister, Ben Chifley, and Minister for Post-war Reconstruction, J.J. Dedman. The bill was passed on 1 August 1946 with support from Opposition Leader Robert Menzies. A group of eminent Australian scholars were involved in the infancy of the ANU, including a leader in radar development and nuclear physics, Sir Mark Oliphant; the discoverer of the benefits of penicillin, Sir Howard Florey; eminent historian, Sir Keith Hancock; and renowned economist and public servant, Herbert ‘Nugget’ Coombs.

After its establishment, the university conducted research and provided only postgraduate education. The former Canberra University College was amalgamated into the Australian National University in 1960, as the School of General Studies, to provide for the education of undergraduate students.
Academics
The university's seven Colleges combine research with research-led teaching and are responsible for undergraduate and postgraduate courses.
The Colleges

ANU College of Asia and the Pacific

ANU College of Business and Economics 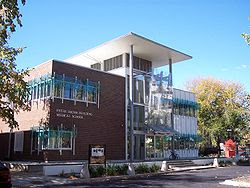 The Institute of Advanced Studies 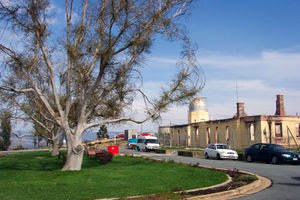 The ANU's main campus is located in, and occupies most of the Canberra suburb of Acton. The campus covers 1.45 km² (350 acres) adjoining native bushland, Black Mountain, Lake Burley Griffin, the suburb of Turner and the city centre. Eight of the university's nine affiliated halls and colleges are located on campus, while Fenner Hall is located on Northbourne Avenue in the nearby suburb of Braddon.
The halls and colleges are:
Bruce Hall.
Ursula Hall.
Fenner Hall.
Burgmann College.
John XXIII College.
Burton & Garran Hall.
Toad Hall.
University House.
Graduate House.
University Lodge

With over 10,000 trees on its "green" campus, the ANU was awarded the Silver Greenhouse Challenge Award at the annual Australian Engineering Excellence Awards in 2003. The Research School of Astronomy and Astrophysics (RSAA) is located away from the main campus in Acton, at the Mount Stromlo Observatory, near Weston Creek in south Canberra. RSAA also runs the Siding Spring Observatory near Coonabarabran, New South Wales. Since the destruction of Mount Stromlo's telescopes in the Canberra bushfires of 2003, this is ANU's only telescope site. The university also runs a coastal campus at Kioloa on the South Coast of New South Wales dedicated to field work training, and a North Australia Research Unit in Darwin in the Northern Territory.