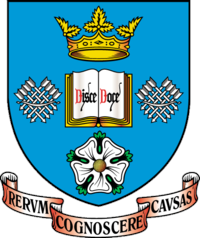 The University of Sheffield is a research university, located in Sheffield in South Yorkshire, England.
History
The University of Sheffield was originally formed by the merger of three colleges. The Sheffield School of Medicine was founded in 1828, followed in 1879 by the opening of Firth College by Mark Firth, a steel manufacturer, to teach arts and science subjects. Firth College then helped to fund the opening of the Sheffield Technical School in 1884 to teach applied science, the only major faculty the existing colleges did not cover. The three institutions merged in 1897 to form the University College of Sheffield. Sheffield is one of the six original Red Brick Universities.

It was originally envisaged that the University College would join Manchester, Liverpool and Leeds as the fourth member of the federal Victoria University.

From 200 full-time students in 1905, the University grew slowly until the 1950s and 1960s when it began to expand rapidly. Many new buildings (including the famous Arts Tower) were built and student numbers increased to their present levels of over 20,000.

In 1995, the University took over the Sheffield and North Trent College of Nursing and Midwifery, which greatly increased the size of the medical faculty. In 2005, the South Yorkshire Strategic Health Authority announced that it would split the training between Sheffield and Sheffield Hallam University - however, the University decided to pull out of providing preregistration nursing and midwifery training due to "costs and operational difficulties".

Over the years, the University has been home to a number of notable writers and scholars, including the literary critic William Empson, who was head of the Department of English; author Angela Carter; five Nobel Prize winners; and Bernard Crick.

The University's Faculty of Pure Science may boast an association with five Nobel Prizes, two for the Department of Molecular Biology and Biotechnology:
University guides confirm our position as one of the UK's leading universities. The Virgin 2007 Alternative Guide to British Universities, for instance, says that “Sheffield is a top university across the board”.

Teaching quality assessments rate our teaching very highly across a wide range of subjects, and official research assessments confirm our reputation as a centre for world-class research in many disciplines.

We have more than 24,000 students from 118 countries, and almost 6000 staff. The University of Sheffield is a popular choice with applicants for university places, and once they arrive our students enjoy the experience so much that many settle in Sheffield after they graduate.

Our academic partners include leading universities around the world. International partnerships include Worldwide Universities Network (USA, Europe and China) and our partnership with Leeds and York Universities (the White Rose Consortium) has combined research power greater than that of either Oxford or Cambridge.

The University's history stretches back to 1828, when the Sheffield School of Medicine was founded, and our University Charter was granted in 1905.

Sheffield was the Sunday Times University of the Year in 2001 and has consistently appeared as one of their top-30 institutions. Just three universities nationally have more than Sheffield's 30 top-rated subjects for teaching excellence and only five have a greater number than the 35 subject areas at Sheffield deemed to have conducted world-class research in the most recent ratings.

Email ThisBlogThis!Share to TwitterShare to FacebookShare to Pinterest
Labels: Sheffield, UK
Newer Post Older Post Home
The roots of education are bitter, but the fruits is sweet ~ Aristotle
Education is the most powerful weapon which you can use to change the world ~ Nelson Mandela
Education is not a preparation for life, Education is life itself ~ John Dewey