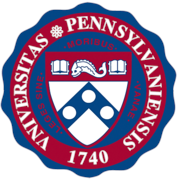 The University of Pennsylvania (also known as Penn) is a private, coeducational research university located in Philadelphia, Pennsylvania. According to the university, it is America's first university and is the fourth-oldest institution of higher education in the United States. Penn is also a member of the Ivy League and is one of the Colonial Colleges. 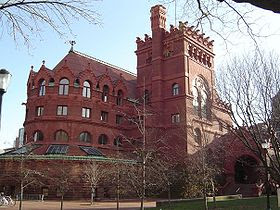 Benjamin Franklin, Penn's founder, advocated an educational program that focused as much on practical education for commerce and public service as on the classics and theology. Penn was one of the first academic institutions to follow a multidisciplinary model pioneered by several European universities, concentrating several "faculties" (e.g., theology, classics, medicine) into one institution.

Penn is acknowledged as a leader in the arts and humanities, the social sciences, architecture, communications and education. Penn is particularly noted for its schools of business, law and medicine (see BusinessWeek magazine and U.S. News and World Report). About 4,500 professors serve nearly 10,000 full-time undergraduate and 10,000 graduate and professional students. 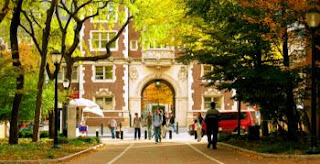 In FY2006, Penn's academic research programs undertook more than $660 million in research, involving some 4,200 faculty, 870 postdoctoral fellows, 3,800 graduate students, and 5,400 support staff. Much of the funding is provided by the National Institutes of Health for biomedical research. In 2005, Penn was awarded $470 million in grants by the NIH, ranking it second behind Johns Hopkins University among all universities.

Penn tops the Ivy League in annual spending, with a projected 2007 budget of $4.77 billion, including $2.43 billion for the academic component and $2.34 billion for the Health System (Hospitals, clinical practices, health care affiliates).In 2006, it ranked fourth among U.S. universities in fundraising, bringing in about $409.5 million in private support.

Penn is incorporated as "The Trustees of the University of Pennsylvania." The university is one of 14 founding members of the Association of American Universities. 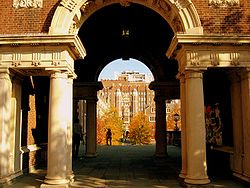 History
In 1740, a group of Philadelphians joined together to erect a great preaching hall for the evangelist Rev. George Whitefield. Designed and built by Edmund Woolley, it was the largest building in the city and it was also planned to serve as a charity school. The fundraising, however, fell short and although the building was erected, the plans for both a chapel and the charity school were suspended.

In the fall of 1749, eager to create a college to educate future generations, Benjamin Franklin circulated a pamphlet titled "Proposals for the Education of Youth in Pennsylvania," his vision for what he called a "Publick Academy of Philadelphia."

However, according to Franklin's autobiography, it was in 1743 when he first drew up a proposal for establishing the academy, "thinking the Rev. Richard Peters a fit person to superintend such an institution." Unlike the other three American Colonial colleges that existed at the time — Harvard, William and Mary, and Yale — Franklin's new school would not focus merely on education for the clergy.

He advocated an innovative concept of higher education, one which would teach both the ornamental knowledge of the arts and the practical skills necessary for making a living and doing public service. The proposed program of study became the nation's first modern liberal arts curriculum. 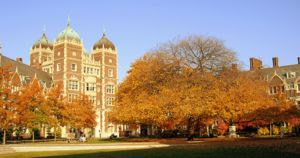 Franklin assembled a board of trustees from among the leading citizens of Philadelphia, the first such non-sectarian board in America. At the first meeting of the 24 members of the Board of Trustees (November 13, 1749) the issue of where to locate the school was a prime concern. Although a lot across Sixth Street from Independence Hall was offered without cost by James Logan, its owner, the Trustees realized that the building erected in 1740, which was still vacant, would be an even better site.

On February 1, 1750 the new board took over the building and trusts of the old board. In 1751 the Academy, using the great hall at 4th and Arch Streets, took in its first students. A charity school also was opened in accordance with the intentions of the original "New Building" donors, although it lasted only a few years. 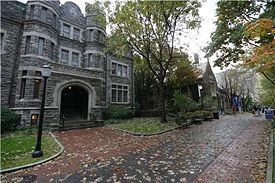 Quad in the Fall, facing Ware College HouseFor its date of founding, the University uses 1740, the date of "the creation of the earliest of the many educational trusts the University has taken upon itself"(the charity school mentioned above) during its existence.

The institution was known as the College of Philadelphia from 1755 to 1779. In 1779, not trusting then-provost Rev. William Smith's loyalist tendencies, the revolutionary State Legislature created a University of the State of Pennsylvania.

The result was a schism, with Rev. William Smith continuing to operate an attenuated version of the College of Philadelphia. In 1791 the legislature issued a new charter, merging the two institutions into the University of Pennsylvania with twelve men from each institution on the new board of trustees. These three schools were part of the same institution and were overseen by the same board of Trustees. 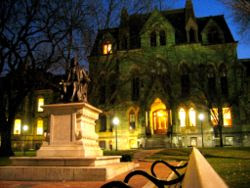 Penn offers specialized joint-degree programs, which award candidates degrees from multiple schools at the University upon completion of graduation criteria of both schools. Undergraduate programs include:
The Jerome Fisher Program in Management and Technology
The Huntsman Program in International Studies and Business
Nursing and Health Care Management
The Roy and Diana Vagelos Program in Life Sciences and Management