The École normale supérieure (also known as Normale Sup', Normale, ENS, ENS-Paris, ENS-Ulm or Ulm) is a prestigious French grande école, possibly the most prestigious. This establishment of higher education, with small attendance, focuses on training future academics in a variety of fields.

The first began in 1794. 9 Brumaire an III, on the report Lakanal speaking on behalf of the Committee of Public Instruction, the Convention decreed that "it is established in Paris a Normal School, which will be invited from all parts of the Republic, citizens who are already educated in the sciences useful to learn under the most skilled teachers in every genre, the art of teaching. "

The École normale supérieure de Sèvres was established in 1881, one year after the Act Sée (1880) on secondary education of girls, and three years before the creation of an aggregation of women in science (1884).

The decree of 26 August 1987, which establishes the new school provides in Article 2 that "The ENS is preparing a cultural and scientific high-level, students intending to basic or applied scientific research at the university education and in the preparatory classes for the Grandes Ecoles and secondary education and, more generally, for the State administrations and local authorities, their public institutions and enterprises. "
Campus
Its main campus is located around the rue d'Ulm (Ulm Street, the main building being at 45, rue d'Ulm) in the 5th arrondissement of Paris. The ENS has annex campuses on Boulevard Jourdan (48.822439, 2.331312, in Paris) and in Montrouge (a suburb; 48.820742, 2.315180), as well as a biology annex in the countryside at Foljuif.

Originally meant to train high school teachers through the agrégation, it is now an institution training researchers, professors, high-level civil servants, as well as business and political leaders. It focuses on the association of training and research, with an emphasis on freedom of curriculum.

Its alumni include eight laureates of the Fields Medal (all French holders of the Fields medal were educated at the École Normale Supérieure), which is the equivalent of the Nobel Prize for the mathematical sciences, as well as Nobel Prize winners in both science and literature. 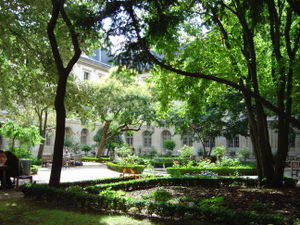 As in many other grandes écoles, the ENS mostly enrolls its students two or three years after high school. The majority of them come from prépas (preparatory classes, see grandes écoles) and have to pass France's most selective competitive exams. Studies at ENS last four years. Many devote the third year to the agrégation which allows them to teach in high schools or universities. ENS-Ulm annually enrolls about 100 students in science and 100 in the humanities.

The normaliens, as the students of the ENS are known, keep a level of excellence in the various disciplines in which they are trained. Normaliens from France and other European Union countries are considered civil servants in training, and as such paid a monthly salary, in exchange for an agreement to serve France for 10 years, including those of studies. Although it is seldom applied in practice, this exclusivity clause is redeemable (often by the hiring firm).

Apart from the normaliens, ENS also welcomes select foreign students ("international selection"), as well as select students from neighboring universities, to follow the same curriculum but without the reception of a stipend. It also participates in various graduate programs and has extensive research laboratories.

The professors at the ENS are called the "caïmans", and the goldfish in the pond the "Ernests".

The fictitious mathematician Nicolas Bourbaki's "association of collaborators" is based at ENS.

The Scuola Normale Superiore in Pisa was founded in 1810 as a branch of the École normale supérieure and later gained independence.

The ENS group has opened a branch at the ECNU in Shanghai. 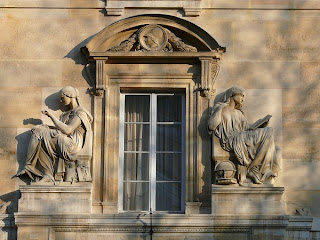 Academics
Training through research at the ENS involves a wide range of scientific disciplines and literary whose teachings are grouped in thirteen departments or literary and scientific sections (biology, chemistry, cognitive studies, geography, history, science, literature and languages, pure and applied mathematics, philosophy, physics, sciences of antiquity, social sciences, earth-atmosphere-ocean). In each of these departments or sections, research laboratories and educational services are closely intertwined. If the original mission to train teachers remains the essential purpose of the School, it has considerably expanded our days, and opportunities of students are very diverse.

It entered the contest by ENS at the end of at least two years of college. Schooling at the École normale supérieure lasts four years. It starts with an undergraduate training provided by a second cycle (Bachelor, Master) and DEA, which usually hold two to three years of schooling (in science, These lessons are grouped into a master). It continues in principle by the beginning of a thesis, and has possibly at a variable fees, the preparation of an aggregation. In these four years, during which the normaliens french and European officials are paid as interns (about 1200 Euros per month), may be added, ongoing studies, one or two years' leave without pay which is often abroad with scholarships and exchange agreements.

Students make a university to get their diplomas and Master's Degree, usually in the context of masters cohabilités by ENS where they can be enrolled in the ENS.

In addition, the School issues a certificate of establishment that punishes the training it provides. This training leads to the preparation of the PhD, often from the 4th grade, and also hosts students from preparatory schools to large universities or French or foreign, selected according to criteria of excellence