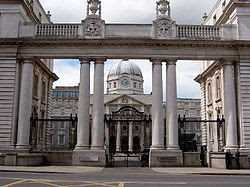 Originally located in Dublin city centre, most of the university's faculties have since been relocated to a 148 hectares (365 acre) park campus at Belfield, four kilometres to the south of the centre of Dublin city. 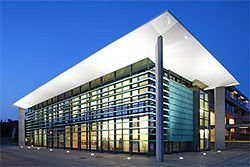 University College Dublin (UCD) is a dynamic, modern university where cutting-edge research and scholarship provide a stimulating intellectual environment - the ideal surroundings for learning and discovery.

The university can trace its history to the institution founded in 1854 as the Catholic University of Ireland, was established as UCD in 1880 under the auspices of the Royal University, and received its charter in 1908. 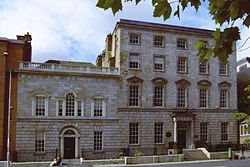 In the years following the Catholic Emancipation in Ireland a movement led by Paul Cullen attempted to make higher-level education accessible to Irish Catholics taught by fellow-Catholics for the first time. The Anglican Trinity College Dublin still imposed a religious test, though Catholics had studied there since the 1780s. As a result of these efforts a new Catholic University of Ireland was opened in 1854 and John Henry Newman was appointed as its first rector. Initially only seventeen students enrolled, the first of these being the grandson of Daniel O’Connell.

As a private university the Catholic University was never given a royal charter, and so was unable to award recognized degrees and suffered from chronic financial difficulties. Newman left the university in 1857 and it subsequently went into a serious decline. This trend was reversed in 1880 with the establishment of the Royal University of Ireland. The Royal Universities charter entitled all Irish students to sit the Universities examinations and receive its degrees. Although in many respects the Catholic University can be viewed as a failure, the future University College inherited substantial assets from it including a successful medical school (Cecilia Street) and two beautiful buildings, Newman House on St Stephen's Green and the adjoining University Church

For over 150 years, UCD has produced graduates of remarkable distinction including famous surgeons, architects, entrepreneurs and five of Ireland’s Taoisigh (Prime Ministers). Perhaps the best known of all its graduates is the writer James Joyce, who completed his Bachelor of Arts at the university in 1902. 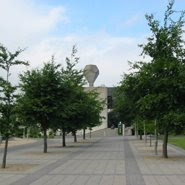 Established in 1854, the university played a key role in the history of the modern Irish State and today it plays a leading part in shaping Ireland’s future. As Ireland forges a new identity through relationships with international partners, the university will adopt an increasingly international outlook.

To accommodate the university’s phenomenal growth during the 1960s and 1970s, UCD relocated from St Stephen's Green in Dublin city centre, where it was first established, to the Belfield campus 4 km from the city centre. The university still maintains Newman House on St Stephen’s Green in Dublin, one of its original buildings and there is also a campus facility at Blackrock, Dublin, where the UCD Michael Smurfit Graduate School of Business is located.

UCD has recently published a campus development plan to chart the physical evolution of the Belfield campus for the next decade. This plan includes a vision for world class architecture, a more than ten-fold increase in the boundary woodland and the network of pedestrian walkways, and a transformation of the academic infrastructure to reflect the ambitions of a leading European university.

More than 25% of the current student population is engaged in graduate research and scholarship. Each of the five colleges at the university has its own dedicated graduate school with the explicit task of enhancing doctoral and post-doctoral training to match the national strategy of establishing Ireland as a premier source of 4th level education and research.

The University is committed to maintaining a high level of research activity, to commercialising intellectual property arising from its research programmes, and to further developing its collaborative links with industry and commerce, and with educational and research institutions internationally.

UCD has extensive facilities to support teaching and learning including well-resourced libraries and computing facilities. As the university rapidly moves forward in the e-learning arena, an increasing number of resources to support learning and research are electronically available, both on- and off-campus. Student health, welfare and counselling services are second-to none and there are also superb opportunities for sports and recreation.