McGill University is a publicly funded, co-educational research university located in the city of Montreal, Quebec, Canada. McGill's main campus is set upon 320,000 square metres (80 acres) at the foot of Mount Royal in Montreal's downtown district. A second campus—Macdonald Campus—is situated on 6.5 square kilometres (1,600 acres) of fields and forested land in Sainte-Anne-de-Bellevue, 30 kilometres west of the downtown campus. McGill has 21 faculties and professional schools and offers degrees and diplomas in over 300 fields of study. The university also has field research stations in Mont-Saint-Hilaire and Schefferville, Quebec; Axel Heiberg Island in Nunavut; and Holetown, Barbados.
History

McGill was founded in 1821 from a bequest by James McGill, a prominent Montreal merchant, who left an endowment in addition to the property on which the university now stands. McGill would become the first non-denominational university in the British Empire.

McGill's Redpath Museum, commissioned in 1880 and opened in 1882, is the oldest building built specifically as a museum in North America. Its natural history collections boast material collected by the same individuals who founded the collections of the Royal Ontario Museum and the Smithsonian.
Resting at the foot of Mont Royal, McGill University owes its origins to the vision and philanthropy of James McGill, a wealthy fur trader and merchant who left £10,000 and a 46-acre estate towards the establishment of a college or a university bearing his name.

Founded in 1821, "McGill College" began holding classes on January 27 in 1829 in the merchant's former country house. Four years later, the College awarded a Doctor of Medicine and Surgery to its first graduate, William Leslie Logie. Construction on the Arts Building began in 1839, as the college had quickly outgrown the country house. This iconic structure still anchors the downtown campus today.
The Importance of Philanthropy
Philanthropy continued to shape McGill in the ensuing decades. With the arrival of the charismatic and world-renowned geologist, Sir William Dawson, Principal from 1855-1893, McGill grew in both size and prestige. Under his leadership, the great benefactors of the day—Lord Strathcona, Sir William Macdonald, William Molson and Peter Redpath—supported a major expansion of campus, which included the construction of more than ten new buildings. In 1885, the name McGill University was formally adopted by the college's Board of Governors.

A Tradition of Innovation
With investment came innovation and progress. Lord Strathcona established a special fund for the education of women which led to the admission of McGill's first female students in 1884. One graduate, Carrie Derick, BA1890, was the first woman to become a professor in Canada, teaching botany at McGill. Large gifts from Sir William Macdonald around the turn of the century allowed McGill to add a second campus in Ste Anne de Bellevue and attract professors such as Ernest Rutherford, whose Nobel Prize-winning research on the nature of the radioactivity began a long tradition of McGill innovation, which has included the invention of the world's first artificial cell and Plexiglas.
Rapid Growth
McGill's reputation for excellence continued to grow as the post-war years dramatically transformed the University. The influx of returning soldiers, and then the Baby Boom generation tripled McGill's enrolment. The shift from a purely private institution to a publicly funded one opened its doors to more students. At the same time, the campus grew, with modern concrete and glass structures springing up alongside McGill's older stone buildings.

General Information
McGill's student population includes, both full-time and part-time, 23,758 undergraduate and 7,323 graduate students in over 340 academic programs in eleven faculties (as of 2007-2008). Its students represent a diverse geographic and linguistic background. Of the entire student population, 57.3% are from Quebec, while 23.7% come from the rest of Canada, and 19.0% are international. As their mother tongue, 52.8% of all students speak English, while 18.1% speak French, and 29.1% speak a language other than English or French. 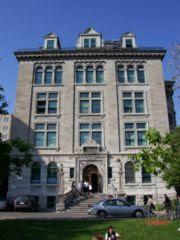 About 90% of students ranked in the top 10% of their high school graduating class.McGill has produced 128 Rhodes Scholars, more than any other Canadian university, as well as seven Nobel Laureates.

Many are attracted to the culture and dynamism of Montreal, the university's reputation, and the relatively low tuition in comparison to many top public and private universities in the United States. However, this trend is being repeated at many other Canadian universities, particularly those close to the Canada/U.S. border. In turn, many Canadian universities, including McGill, are stepping up their recruitment efforts at U.S. high schools.

Since 1996, McGill, in accordance with the Ministère de l'Éducation, du Loisir et du Sport (MELS), has had eight categories qualifying certain international students an exemption from paying international fees. These categories include students from France, a quota of students from select countries which have agreements with MELS (including Algeria, China, and Morocco), students holding diplomatic status (and their dependants), and students enrolled in certain language programs leading to a degree in French.

There are nearly 1,600 tenured or tenure-track professors, plus another 4,300 adjunct and visiting professors teaching at the university.McGill consistently leads the rest of Canada in terms of research dollars per full-time faculty member and number of refereed publications per full-time faculty member. According to a study by Research Infosource, research funding represents approximately $259,100 per faculty member, the fourth highest in the country. Overall, in 2007, Research Infosource ranked McGill the second-best research university in the country, after the University of Toronto.McGill also has one of the most per faculty research dollars nationwide from federal and provincial sources of funding (including the Canada Foundation for Innovation and the Natural Sciences and Engineering Research Council). 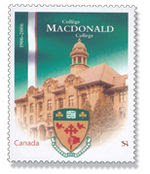 Shanghai Jiao Tong University, in its Academic Ranking of World Universities 2007, ranked McGill third in Canada, 44th in the Americas, and 63nd in the world. 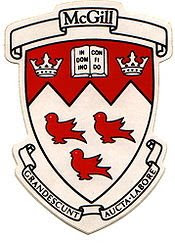