The University of Tokyo was established in 1877 as the first national university in Japan. As a leading research university, the University of Tokyo offers courses in essentially all academic disciplines at both undergraduate and graduate levels and conducts research across the full spectrum of academic activity. The university aims to provide its students with a rich and varied academic environment that ensures opportunities for both intellectual development and the acquisition of professional knowledge and skills. 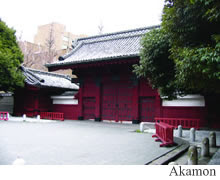 The University of Tokyo has a faculty of over 4,000 and a total enrollment of about 29,000, evenly divided between undergraduate and graduate students. As of 2006 there were 2,269 international students, and over 2,700 foreign researchers come annually to the university for both short and extended visits. The University of Tokyo is known for the excellence of its faculty and students and ever since its foundation many of its graduates have gone on to become leaders in government, business, and the academic world.
History
The university was founded by the Meiji government in 1877 under its current name by amalgamating older government schools for medicine and Western learning. It was renamed "the Imperial University (帝國大學 Teikoku daigaku)" in 1886, and then Tokyo Imperial University (東京帝國大學 Tōkyō teikoku daigaku?) in 1887 when the Imperial University system was created. In 1947, after Japan's defeat in World War II, it re-assumed its original name. With the start of the new university system in 1949, Todai swallowed up the former First Higher School (today's Komaba campus) and the former Tokyo Higher School, which henceforth assumed the duty of teaching first and second-year undergraduates, while the faculties on Hongo main campus took care of third and fourth-year students.

Although the university was founded during the Meiji period, it has earlier roots in the Astronomy Agency (天文方; 1684), Shoheizaka Study Office (昌平坂学問所; 1797), and the Western Books Translation Agency (蕃書和解御用; 1811). These institutions were all official agents of the 徳川幕府 Tokugawa (1603-1867) government, and were instruments for the importation and translation of European studies and civilizations.

Kikuchi Dairoku, an important educational figure in Japan, was one of the presidents of Tokyo Imperial University. 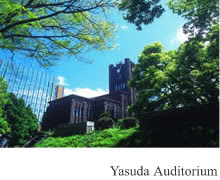 The University of Tokyo is composed of three campuses: Hongo, Komaba, and Kashiwa. In addition, some University of Tokyo facilities are situated in other parts of both Tokyo and the country. The main campus of the university is located in Hongo Bunkyo-ku, Tokyo and occupies about 56 hectares of the former Kaga Yashiki, the Tokyo estate of a major feudal lord. Parts of the seventeenth century landscaping of the original estate have been preserved to provide greenery and open space. The campus is graced by the Kaga Estate's celebrated Akamon, or Red Gate, which dates from 1827 and has been designated as an 'Important Cultural Property' by the Japanese Government. Most of the faculties, graduate schools, and research institutes of the university are located on the Hongo Campus.

The Kashiwa Campus, the newest of the three, is located in Kashiwa City, Chiba Prefecture, a suburb of Tokyo. Housed on this approximately 24-hectare campus are the Graduate School of Frontier Sciences, the Institute for Cosmic Ray Research, the Institute for Solid State Physics, among other research facilities.
The University of Tokyo in the twenty-first century is being built up on the strong links among these three campuses. 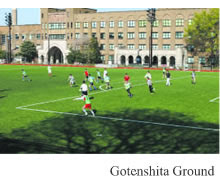 Students carry out two annual festivals: the Komaba Festival in November on the Komaba Campus, organized and run by first and second-year undergraduates, and the May Festival or 'Gogatsusai' on the Hongo Campus, organized by a committee drawn from all undergraduate students at the university. The latter is a three-day event and a chance for students, with the support of the university, to promote their academic and extracurricular activities to society. These festivals are both open to the public, and many visitors come to get a glimpse of activities at the university. In addition, the University of Tokyo has recently introduced a new 'open campus' annual event, which introduces university life to high school students hoping to enter this university from all over Japan.

As the preeminent academic institution in Japan, the University of Tokyo has a long history of nurturing and promoting academic excellence. One of the ways the university does this is through recognizing the achievements of outstanding students with the newly-introduced, twice-yearly President's Award. In spring each year, several students are selected from among those nominated by their professors for the award recognizing outstanding academic achievement, and in autumn, a second award is made to students for their extracurricular and cultural activities. From 2007, a single student is also chosen from all those awarded the President's Award that year for the President's Grand Award, recognizing particularly outstanding achievement in any field.

Since 2000, the University of Tokyo has held the 'UT Forum' on a roughly annual basis in partnership with a leading university or universities overseas. The UT Forum is a chance for the university to present the latest research activities and results and for both faculty and graduate students taking part to deepen international relationships. In parallel with the researchers' forum, undergraduate and graduate students also organize and present a students' forum, where they have a chance to experience all aspects of the planning and implementation of an international conference and to develop valuable links with their peers and academics around the world. 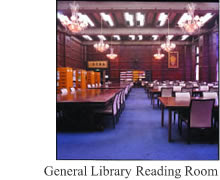 The university organization consists of the College of Arts and Sciences, nine faculties, 15 graduate schools and 11 institutes (for full details see the organization chart on pages 7 and 8 ). There are also 21 university-wide centers open to scholars of all departments and faculties of the University of Tokyo (see the organization chart on page 8 for a complete list); several of these centers are also open to scholars from all universities in Japan. The university-wide centers were created with the aim of facilitating interfaculty collaboration and interdisciplinary research, and often with specific research problems in mind.

The university library system, centered on the General Library, is composed as a network linking the 55 libraries affiliated with the various faculties, institutes, and graduate schools. It holds about 8.1 million books and periodicals, including many rare publications. In response to recent technological innovations, the library system has been actively digitalizing scholarly information. The University Museum is actually a system of specialized museums covering a wide range of fields from paleontology to Andean anthropology, and its collection holds nearly half of the university's 6.4 million items related to research.
Academics
Faculties
Faculty of Law
Faculty of Medicine
Faculty of Engineering
Faculty of Letters
Faculty of Science
Faculty of Agriculture
Faculty of Economics
College of Arts and Sciences
Faculty of Education
Faculty of Pharmaceutical Sciences