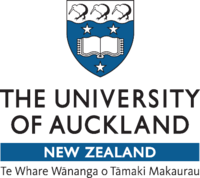 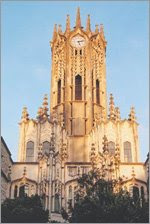 The University of Auckland was formally opened on 23 May 1883 as Auckland University College, part of the University of New Zealand. A disused courthouse and jail served as premises for the 95 students and 4 teaching staff.

The roll increased slowly but steadily during the remainder of the 19th century; by 1901 it had risen to 156 students.
Most students were enrolled part-time, training as teachers or law clerks, although after 1905 the number of commerce students rose markedly.
During this time, the University focused on teaching: research was not expected, and was rarely performed by teaching staff. Nevertheless, some students carried out impressive early research, most notably in chemistry.
The rise of research: 1930-1940s
A surge of interest in academic research at the University arose during the depression of the early 1930s.
A lecturer in history, J. C. Beaglehole, had his temporary position terminated; friends believed this was because of a letter he wrote to a newspaper, defending the right of Communists to distribute their literature. This led to a Council election in which a liberal candidate displaced a conservative member, and Council gradually began to adopt resolutions in favour of academic freedom.
The College subsequently "came alive". For instance, a group of students, led by James Bertram, established a new literary journal, Phoenix, which became the focus for the first literary movement in New Zealand history.
The University received a further intellectual stimulus in 1934 when four new professors arrived. H.G Forder (Mathematics), Arthur Sewell (English), C. G. Cooper (Classics) and James Rutherford (History) all led the way in establishing Auckland University College as an internationally respected research institution.
Postwar expansion: 1950s-70s
The 1950s were a difficult period in the history of The University of Auckland: the roll had soared after World War II, reaching 4000 by 1959, and buildings were inadequate and overcrowded.
However, despite these problems, there was significant progress. In 1962, the abolition of the University of New Zealand saw the University finally become independent. 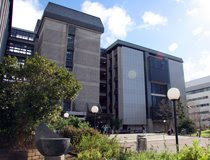 New subjects such as Geography, Anthropology, Maori Studies, and Fine Arts were introduced, and there was a new focus on staff research. Many of the new and younger academics became very active researchers, as evidenced by the growing lists of staff publications. Staff salaries were raised and for the first time students were given generous bursaries, resulting in a rapid increase in the proportion of full-time students.
The University undertook a massive building programme, and over the next two decades the campus was transformed as one large building after another was erected. By the end of the 1960s The University of Auckland had the largest university library in New Zealand.
New teaching subjects were introduced, including Political Studies, Art History and Sociology, and in 1968 teaching commenced in the new Medical School.
The academic boom of the sixties continued well into the seventies, and by 1970 there were 9300 students. Council focus shifted to a desire to increase student facilities, which ultimately resulted in the acquisition of a theatre, a large gymnasium and recreation centre, and a playing field complex.
The University was also quick to accept the challenges of new technological advancements of the era, introducing new subjects such as Management Studies and Computer Science.
The 1970s also brought numerous social changes, such as an increase in the proportion of Maori and Polynesian students and the numbers of female and mature students. In the years 1975-81 the first two female professors were appointed: Marie Clay and Patricia Bergquist.
Further growth: 1980s-1990s
By 1986, the roll had climbed to 13,000. Anxious to respond to a demand for University education, The University of Auckland began to offer courses at Northland Polytechnic, Manukau Polytechnic and at the Auckland College of Education.
Acquiring buildings from the Commonwealth Games Village, the University also began to develop a campus at Tamaki, initially offering courses in commerce, and then in arts and sciences.
The period of intensive new construction, begun in the 1960s, drew to a close with completion of the new School of Music in 1986 and the Marae complex in 1988. Education and the Law School moved into a new precinct in 1992.
Looking to the future: 2000 and beyond
Today, The University of Auckland is the largest university in New Zealand, hosting over 40,000 students on five Auckland campuses, with a School of Theology, and eight faculties representing each of its main disciplines: Arts, Business and Economics, Creative Arts and Industries, Education, Engineering, Law, Medical and Health Sciences, and Science. Almost all teaching staff engage in research which attempts to advance the frontiers of knowledge and understanding, and around 5000 students are enrolled for postgraduate studies, 1200 of whom are undertaking doctorates.
The University has continued to improve its facilities, with a new information and student commons complex already complete on the City Campus; new teaching and research spaces at Tamaki Campus; and a new state-of-the-art home for the Business School recently completed.
University arms
The University Arms (crest) were granted by Letters Patent on 15 February 1962, and are recorded in the College of Arms, London. 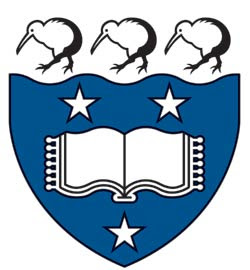 The open book with seven clasps on either side, and the three stars express the idea of learning pursued under the sky of the Southern Hemisphere.
The kiwis signify New Zealand; the wave beneath them represents Auckland's coastal location.
University motto
The University's motto is: "Ingenio et Labore".
Freely translated from the Latin, it means "by natural ability and hard work". 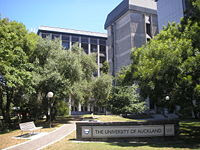 what are the courses offered in auckland university

well there are a lot of courses available. Which field are u interested in???

IS IT GOOD FOR PURSUING MS IN INFORMATION TECHNOLOGY HERE?WHAT IS THE GRE AND TOEFL SCORE REQUIRED? WHAT IS THE OVERALL COST FOR TWO YEARS?IS SCHOLARSHIPS PROGRAM AVAILABLE HERE?

I think you can check out the University of Auckland's site for more details: www.auckland.ac.nz