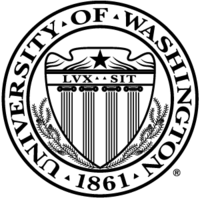 The University of Washington, founded in 1861, is a public research university in Seattle, Washington, United States. Also known as Washington and locally as The U or UW (usually pronounced "U-Dub"), it is the largest university in the Northwestern United States and the oldest public university in Washington. The UW maintains three locations, with its flagship campus in Seattle's University District and branch campuses in Tacoma and Bothell. Its operating budget for fiscal year 2005 was $3.1 billion.he university is known as a Public Ivy, an American term for state-funded institutions of higher learning that "provide[s] an Ivy League collegiate experience at a public school price." 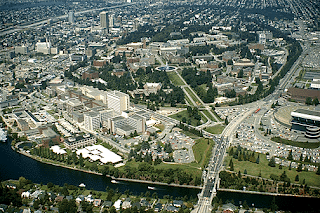 In 1860, the Legislative Assembly of Washington Territory passed "An Act to Relocate the Territorial University" in Seattle, "provided a good and sufficient deed to ten acres of land, eligibly situated in the vicinity of Seattle, be first executed to the Territory of Washington for University purposes." Early in 1861 Arthur and Mary Denny, Charles and Mary Terry, and Edward Lander donated land on a forested 10-acre knoll overlooking Elliott Bay. The University was established there, on the site of what is now the Fairmont Olympic Hotel on University Street in downtown Seattle.

The Territorial University of Washington opened November 4, 1861. The fledgling University was little more than a backwoods school, which closed for lack of funds several times during its earliest years. The first faculty consisted of one professor who taught a curriculum that included Latin, Greek, English, history, algebra, and physiology.

Washington became a state in 1889, and by that time the University was firmly established as an institution of higher education. Growing enrollment and the lack of available land in what was becoming downtown Seattle soon made a larger campus necessary, and in 1895 classes opened in Denny Hall, the first building on the present Seattle campus. 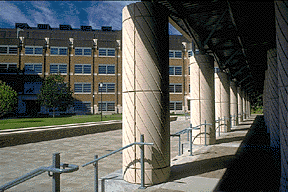 In 1909 the University of Washington was the site of a world's fair called the Alaska-Yukon-Pacific Exposition. The exposition opened a new period for the University, as national attention was focused on it and the Pacific Northwest.

Since World War II, the UW has earned an international reputation for its research and graduate programs. It is a leader in a variety of fields. Research is of great benefit to the broader community, and undergraduates benefit by learning from professors who are at the forefront of generating new knowledge. The UW's graduate programs are among the most highly rated in the nation.

The University offers bachelor's, master's and doctoral degrees through its 140 departments, themselves organized into various colleges and schools:

Ten member board of regents, appointed by the Governor
President 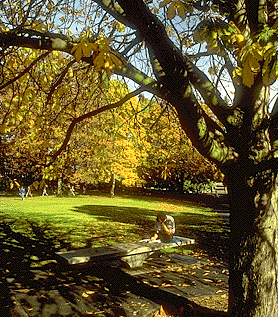 As of the 2006-07 autumn term, the university has 40,216 students. In 2007, the average high school GPA of incoming freshmen was 3.75, and the average SAT (math and critical reading) score was 1,251. About 33% of all undergraduates are members of ethnic minority groups. 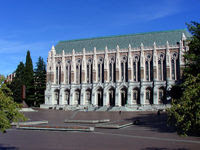 The University of Washington library system is among the largest academic libraries in the United States, with holdings of more than 6.5 million volumes and 7.5 million microforms. The Association of Research Libraries ranked the UW library system between the top fifth and fifteenth in various categories.

UW is also the host university of ResearchChannel program, the only TV channel in the United States dedicated solely for the dissemination of research from academic institutions and research organizations.Current participation of ResearchChannel includes 36 universities, 15 research organizations, two corporate research centers and many other affiliates. UW also disseminates knowledge through its proprietary UWTV channel and online.

To promote equal academic opportunity, especially for people of low income, UW launched Husky Promise in 2006. Families of income up to 65 percent of state median income or 235 percent of federal poverty level are eligible. With this, up to 30 percent of undergraduate students may be eligible. The cut-off income level that UW set is the highest in the nation, making top quality education available to more people. UW President, Mark Emmert, simply said that being "elitist is not in our DNA". "Last year, the University of Washington moved to a more comprehensive approach [to admissions], in which the admissions staff reads the entire application and looks at grades within the context of the individual high school, rather than relying on computerized cutoffs."

Email ThisBlogThis!Share to TwitterShare to FacebookShare to Pinterest
Labels: University of Washington, USA

I clicked on the link for "Washington University" and instead arrived at the page for University of Washington. U-Dub is a fine public university, one of the best on the West Coast, but it is not in the same league with Wash U.