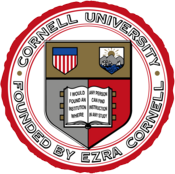 The youngest member of the Ivy League, Cornell was founded in 1865 by Ezra Cornell and Andrew Dickson White as a coeducational, non-sectarian institution where admission was offered irrespective of religion or race. Inaugurated shortly after the American Civil War, its founders intended that the new university would teach and make contributions in all fields of knowledge — from the classics to the sciences and from the theoretical to the applied. These ideals, unconventional for the time, are captured in Cornell's motto, an 1865 Ezra Cornell quotation: "I would found an institution where any person can find instruction in any study."

The university is organized into seven undergraduate colleges and seven graduate divisions, each defining its own academic programs in near autonomy. Since the mid-20th century, the university has been expanding both its campus resources and influence worldwide. From a new residential college housing system to its 2001 founding of a medical college in Qatar, Cornell claims "to serve society by educating the leaders of tomorrow and extending the frontiers of knowledge."Cornell counts more than 240,000 living alumni, 28 Rhodes Scholars and 40 Nobel laureates affiliated with the university as faculty or students.

Research is a central element of the university's mission; Cornell spent $605 million on research and development in a diverse group of fields during the July 2005 to June 2006 fiscal year.

Cornell University was created on April 27, 1865 by a New York State Senate bill that named the university as the state's land grant institution. Senator Ezra Cornell offered his farm in Ithaca, New York, as a site and $500,000 of his personal fortune as an initial endowment. Fellow senator and experienced educator Andrew Dickson White agreed to be the first president. During the next three years, White oversaw the construction of the initial two buildings and traveled about the globe, attracting students and faculty.

The university was inaugurated on October 7, 1868, and 412 men were enrolled the next day.Two years later, Cornell admitted its first women students, making it the first coeducational school among what came to be known as the Ivy League. Scientists Louis Agassiz and James Crafts were among the faculty members.

Cornell expanded significantly in the 20th century, with its student population growing to its current count of about 20,000 students. The faculty expanded as well; by the century's end, the university had more than 3,400 faculty members. Along with its population growth, Cornell increased its breadth of course offerings. Today, the university has wide-ranging programs and offers more than 4,000 courses.

In the 2000s, Cornell has been expanding its international programs. In 2001, the university founded the Weill Cornell Medical College in Qatar, the first American medical school outside of the United States.[It continues to forge partnerships with major institutions in India, Singapore, and the People's Republic of China. The university, with its high international profile, claims to be "the first transnational university". 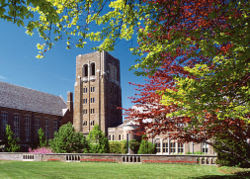 Cornell is a non-profit institution, receiving most of its funding through tuition, research grants, state appropriations, and alumni contributions.

Three of its undergraduate schools/colleges and the graduate-level New York State College of Veterinary Medicine are called "statutory colleges" or "contract colleges". These colleges receive significant partial, ongoing funding from the state of New York to support their teaching, research, and service missions.


Cornell is decentralized, with its colleges and schools exercising wide autonomy. Each defines its own academic programs, operates its own admissions and advising programs, and confers its own degrees. 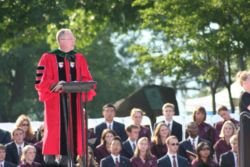 The only university-wide requirements for a baccalaureate degree are to pass a swimming test, take two physical education courses, and satisfy a writing requirement. Although students are affiliated with their individual college or school, they may take courses in any of the colleges, provided they have fulfilled the course prerequisites. A handful of inter-school academic departments offer courses in more than one college. Seven schools provide undergraduate programs and an additional seven provide graduate and professional programs. Students pursuing graduate degrees in departments of these schools are enrolled in the Graduate School. The School of Continuing Education and Summer Sessions offers programs for college and high school students, professionals, and other adults.

Several other universities have used Cornell as their model, including the University of Sydney in Australia and the University of Birmingham in the United Kingdom; the latter on the recommendation of one of its financiers. Andrew Carnegie.

Graduates of Cornell are known as "Cornellians". As of August 2005, the university counted 244,276 living Cornellians. Many are active through organizations and events including the annual Reunion Weekend and Homecoming, weekend festivities in Ithaca, and the International Spirit of Zinck's Night. 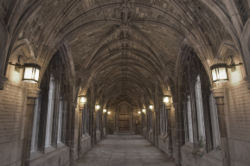 In athletics, Cornellians have won Olympic gold medals, been inducted into sports halls of fame, include the current commissioner of the National Hockey League, led numerous teams as general managers and coaches including Glenn "Pop" Warner, and Bruce Arena, former head coach of the United States men's national soccer team. 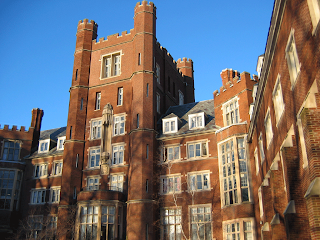 The College of Agriculture and Life Sciences (CALS) is the second-largest undergraduate college at Cornell University and the third-largest college of its kind in the United States. It has been ranked in national surveys as the best college of agriculture and related sciences in the country.
College of Architecture, Art, and Planning

The College of Architecture, Art, and Planning has a distinguished tradition in architectural design, history, and theory; urban and regional policy and planning; and professional training in fine and visual arts.
College of Arts and Sciences

The College of Arts and Sciences is Cornell's largest undergraduate college. It provides a high-quality liberal arts education to its own students, and its courses are also accessible to all other students at Cornell. The college's faculty includes national and international leaders in their respective disciplines.
College of Engineering

The Cornell College of Engineering excels in innovative teaching and research, in developing practical applications and approaches to problems and areas of study, and in preparing professionals and leaders who will have worldwide influence on technologies and societies.
School of Hotel Administration

The Cornell School of Hotel Administration's large group of scholars, researchers, and technical staff members, and its service-oriented undergraduate, graduate, and professional degree programs, are helping to shape the global knowledge base for every aspect of hospitality management.
College of Human Ecology

From science and health to policy and design, the College of Human Ecology offers a unique, world class education focused on challenges and opportunities in the real world and an exploration of the human condition. Pioneering research, leadership development, and community outreach are cornerstones of the Human Ecology education and experience.
School of Industrial and Labor Relations

Cornell's School of Industrial and Labor Relations (ILR School) was the nation's first institution of higher education to offer a four-year undergraduate program in the field of ILR. The current primary focus of the ILR School's undergraduate and graduate degree programs and research and outreach activities is on the centrality of workplace issues in an increasingly complex world.

Cornell's Graduate School is organized into more than 90 major fields of graduate study, independent of traditional college and department divisions, to which graduate students are admitted and which confer doctoral and master's research and professional degrees under the guidance of individual Special Committees of faculty members or a field advisor.
Cornell Law School

Cornell Law School faculty members devote themselves to teaching and contributing to the intellectual life of the law, to the classroom rather than the courtroom, and to developing broad-minded and technically sophisticated future lawyers and leaders. The small size of the school creates a strong spirit of camaraderie and community.
Johnson Graduate School of Management

The Johnson Graduate School of Management has three core distinctions: its direct connections to the vast research, teaching, and alumni resources of Cornell -- the largest and most comprehensive Ivy League university; the school's intense, collaborative community -- a plus of its deliberately small size; and its performance-learning approach that yields understanding while demanding results.
Weill Cornell Medical College (New York City)

The Doha, Qatar, branch of Weill Cornell Medical College is the first American medical school ever set up overseas. It is funded by the Qatar government through the Qatar Foundation, operated by Cornell, and began its full Cornell M.D. degree program in September 2004. It also provides a preparatory two-year pre-medical program.
Weill Cornell Graduate School of Medical Sciences (New York City)

Weill Cornell Graduate School of Medical Sciences' seven carefully designed, research-oriented Ph.D. graduate programs provide superb training for those interested in biomedical sciences and in the scientific method of conducting investigative research. The professional staffs of Weill Cornell Medical College and of the Sloan-Kettering Institute form the core faculty of the Graduate School of Medical Sciences.
College of Veterinary Medicine

The College of Veterinary Medicine endorses the concept of one biology in advancing the understanding of animal and human health at the interface of discovery and application. With access to Cornell's world-class resources and recognized strengths in the physical and life sciences, the college fosters open collaboration across disciplines and institutional boundaries, to deliver the greatest possible benefits to society.