TUM is among the highest acclaimed universities in Germany, producing several Nobel Laureates including Gerhard Ertl who in 2007 received the Nobel Prize in Chemistry.

The TUM, like many German universities, is a "no campus" university. However, with new expansion planned in Garching, more and more departments will be placed into the new buildings in Garching. The Garching campus, unlike the downtown area, is set up more like a traditional "quadrangle" style campus with a large grouping of buildings. At the moment, university buildings are spread over four main and several minor locations:
Main campus in downtown Munich
Garching (Mathematics, Computer Science, Physics, Chemistry, Mechanical Engineering...), complete with an on-campus General Electric Company facility
Weihenstephan (Center for Life and Food Science)
Hospital "Rechts der Isar" (Medicine), Munich.

Currently TUM has approx. 21,600 students in undergraduate and graduate programs of which 3,700 are foreign students. 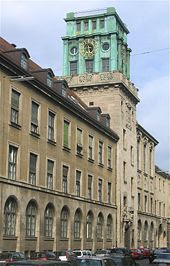 TUM's first spin-off is the German Institute of Science and Technology (GIST), in Singapore (together with National University of Singapore).

TUM is also a member of the TIME network (Top Industrial Managers for Europe).

Email ThisBlogThis!Share to TwitterShare to FacebookShare to Pinterest
Labels: germany, Technische Universität MÜNCHEN [Munich Technical University]
Newer Post Older Post Home
The roots of education are bitter, but the fruits is sweet ~ Aristotle
Education is the most powerful weapon which you can use to change the world ~ Nelson Mandela
Education is not a preparation for life, Education is life itself ~ John Dewey