The University of Warwick is a British campus university located on the outskirts of Coventry, West Midlands, England. It was established in 1965 as part of a government initiative to expand access to higher education, and in 2000 Warwick Medical School was opened as part of an initiative to train more doctors in Britain. Warwick has grown to become one of the highest-ranked universities in the UK, having never been out of the top 10 since its inception. In the last Research Assessment Exercise the University was the 5th highest-ranked research institution in the UK.

In the 1960s and 1970s, Warwick had a reputation as a politically radical institution. More recently, the University has been seen as a favoured institution of the British New Labour government. Warwick was one of the first UK universities to develop close links with the business community, and has been successful in the commercialisation of research. This commercial approach has resulted in it being nicknamed "Warwick University Limited" (or, more recently, "Warwick University PLC").

The University's coat of arms includes atoms of two isotopes of lithium, a DNA helix to represent science and also the Bear and Ragged Staff of Warwickshire and the Elephant and Castle of Coventry. The bear is not chained in the current depiction of the University's coat of arms, although it was in earlier versions and in the letters patent issued by the College of Arms.

It is situated on a large 2.8 km² campus which straddles the boundary between the City of Coventry and the County of Warwickshire. There was much dispute between local sponsors from both the city and county over whether it should be named after Coventry or Warwickshire.

The name "University of Warwick" was adopted, even though the county town of Warwick itself lies some 8 miles (13 km) to the southwest and Coventry City Centre lies only 3.5 miles (5.5 km) east of the campus. A compromise was proposed by Geoffrey Templeman, Deputy Chairman of the university's Planning Committee, who subsequently became the first Vice-Chancellor of the university on the border between the City of Canterbury and the county of Kent which faced a similar naming dispute and adopted the name University of Kent at Canterbury.

However, the name the 'University of Warwick at Coventry' was not adopted. The idea for a university in Coventry was mooted shortly after the conclusion of the Second World War but it was a bold and imaginative partnership of the City and the County which brought the University into being on a 400 acre site jointly granted by the two authorities.

Since then, the University has incorporated the former Coventry College of Education in 1979 and has extended its land holdings by the purchase of adjoining farm land. The University also benefited from a substantial donation from the family of Jack Martin, which enabled the construction of the Warwick Arts Centre.

The University initially admitted a small intake of graduate students in 1964 and took its first 450 undergraduates in October 1965. The student population is currently 30,380, with around a third being postgraduates. 20% of the student body comes from overseas and over 114 countries are represented on the campus. The University has 29 academic departments and over 40 research centres and institutes, in four Faculties: Arts, Medicine, Science and Social Studies. 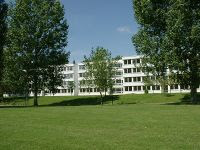 Since its establishment Warwick has expanded its grounds to 721 acres (2.9 km²) with many modern buildings and academic facilities, lakes and woodlands. A recent survey by The Times resulted in the campus being voted the best in the UK by a national poll of university students.


A different type of university

The campus originally consisted of distinctive Modern architecture, in deliberate contrast with the medieval and classical character of older Universities. The freedom given to academic departments combined with an aggressive and unapologetic commercial approach, both policies of the first Vice-Chancellor Lord Butterworth, were new innovations for UK Higher Education and have subsequently been copied by many other Universities.