The Chinese University of Hong Kong, commonly referred to as CUHK, is the second oldest university in Hong Kong; it is campus-based and also the only collegiate university in the territory.

The university's founders hoped that it would become the bridge that connects China and the West, and to combine tradition with modernity. 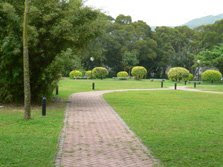