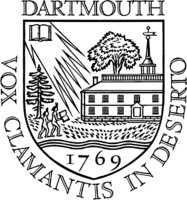 Dartmouth College is a private, coeducational university located in Hanover, New Hampshire, USA. Incorporated as "Trustees of Dartmouth College," it is a member of the Ivy League and one of the nine colonial colleges founded before the American Revolution. In addition to its undergraduate liberal arts program, Dartmouth has medical, engineering, and business schools, as well as 19 graduate programs in the arts and sciences. With a total enrollment of 5,753, Dartmouth is the smallest school in the Ivy League.

History
Established in 1769 by Congregational minister Eleazar Wheelock with funds partially raised by the efforts of Native American preacher Samson Occom, the College's initial mission was to educate and Christianize the Native Americans in the area. After a long period of financial and political struggles, Dartmouth emerged from relative obscurity in the early twentieth century.

In 2004, Booz Allen Hamilton selected Dartmouth College as one of the "World's Ten Most Enduring Institutions," recognizing its ability to overcome crises that threatened its survival (most notably in Trustees of Dartmouth College v. Woodward).[Dartmouth alumni are famously involved in their college, from Daniel Webster to the many donors in the nineteenth and twentieth centuries.

Dartmouth is located on a rural 269-acre (1.1 km²) campus in the Upper Valley region of New Hampshire. Given the College's isolated location, participation in athletics and the school's Greek system is high. Dartmouth's 34 varsity sports team compete in the Ivy League conference of the NCAA Division I. Students are also well-known for preserving a variety of strong campus traditions.

Dartmouth was founded by Eleazar Wheelock, a Puritan minister from Connecticut, who sought to establish a school to train Indians as ministers to spread civilization and Christianity. Wheelock's inspiration for such an establishment largely resulted from his relationship with Mohican Indian Samson Occom. Occom became an ordained minister under Wheelock’s tutelage from 1743 to 1747, returning to his people on Long Island to preach.

Wheelock instituted Moor's Indian Charity School in 1755. The Charity School proved somewhat successful, but additional funding was necessary to continue school’s operations. To this end, Wheelock sought the help of friends to raise money. Occom, accompanied by Reverend Nathaniel Whitaker, traveled to England in 1766 to raise money in the dissenting churches of that nation. With the funds, they established a trust to help Wheelock.

Although the fund provided Wheelock ample financial support for the Charity School, Wheelock had trouble recruiting Indians to the institution – primarily because its location was far from tribal territories. Receiving the best land offer from New Hampshire, Wheelock approached the Royal Governor of the Province of New Hampshire John Wentworth for a charter. Wentworth, acting in the name King George III of the United Kingdom, granted Dartmouth a royal charter on December 13, 1769, establishing the final colonial college and naming the institution after his English friend, William Legge, 2nd Earl of Dartmouth.

Dartmouth's purpose, according to the original charter, was to provide for the Christianization, instruction, and education of "youth of the Indian Tribes in this land [...] and also of English youth and any others." Given the failure of the Charity School, however, Wheelock intended his new College as one primarily for whites.

Wheelock had established a collegiate department within Moor's Charity School in 1768. In 1770, he moved the school to Hanover in 1770, where the College granted its first degrees in 1771. Occom, disappointed with Wheelock's departure from the school's original goal of Indian Christianization, went on to form his own community of New England Indians called Brothertown Indians in New York. 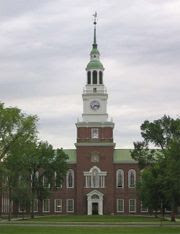 In 1819, Dartmouth College was the subject of the historic Dartmouth College case, in which the State of New Hampshire's 1816 attempt to amend the College's royal charter to make the school a public university was challenged. An institution called Dartmouth University occupied the College buildings and began operating in Hanover in 1817, though the College continued teaching classes in rented rooms nearby.

Daniel Webster, an alumnus of the class of 1801, presented the College's case to the Supreme Court of the United States, which found the amendment of Dartmouth's charter to be an illegal impairment of a contract by the state and reversed New Hampshire's takeover of the College. Webster concluded his peroration with the famous and frequently quoted words: "It is, Sir, as I have said, a small college. And yet there are those who love it."

Dartmouth emerged onto the national academic stage at the turn of the twentieth century. Prior to this period, the College was "little more than a finishing school," relatively unknown, and poorly funded Under the presidency of William Jewett Tucker (1893-1909), Dartmouth saw a complete revitalization of facilities, faculty, and the student body. Twenty new structures replaced antiquated facilities, while the student body and faculty both expanded threefold. Tucker is often credited with having "refounded Dartmouth" and bringing it into national prestige.

Dartmouth, previously serving as a men's college, admitted women as full-time students and undergraduate degree candidates in 1972 amid much controversy. At about the same time, the College adopted its unique "Dartmouth Plan" of academic scheduling.

During the 1990s, the College saw a major academic overhaul under President James O. Freedman and a controversial 1999 initiative to abolish single-sex Greek houses. Since the election of a number of petition elections to the Board of Trustees starting in 2004, the role of alumni in Dartmouth governance has been the subject of ongoing ideological conflicts.

artmouth, a liberal arts institution, offers only a four-year Bachelor of Arts degree to undergraduate students.There are 39 academic departments offering 56 major programs, although students are free to design special majors or engage in dual majors.[28] In 2007, the most popular majors were economics, government, psychological and brain sciences, history, and English.

In order to graduate, a student must complete 35 total courses, eight to ten of which are typically part of a chosen major program. Other requirements for graduation include the completion of ten "distributive requirements" in a variety of academic fields, proficiency in a foreign language, and a writing class or first-year seminar in writing.

Dartmouth also grants degrees in nineteen Arts & Sciences graduate programs. Furthermore, Dartmouth is home to three graduate schools: the Dartmouth Medical School (established 1797), Thayer School of Engineering (1867)—which also serves as the undergraduate department of engineering sciences—and Tuck School of Business (1900). With these graduate programs, conventional American usage would accord Dartmouth the label of "Dartmouth University";
however, because of historical and nostalgic reasons (such as Dartmouth College v. Woodward), the school uses the name "Dartmouth College" for the entire institution. 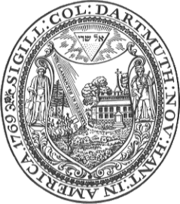 Dartmouth employs a total of 597 tenured or tenure-track faculty members, including the highest proportion of female tenured professors among the Ivy League universities.Faculty members have been at the forefront of such major academic developments as the Dartmouth Conferences, the Dartmouth Time Sharing System, Dartmouth BASIC, and Dartmouth ALGOL 30. As of 2005, sponsored project awards to Dartmouth faculty research amounted to $169 million.

Dartmouth describes itself as "highly selective," ranked as the fifteenth "toughest to get into" school by The Princeton Review in 2007, and classified as "most selective" by U.S. News & World Report.

For the class of 2011, 14,176 students applied for approximately 1,100 places, and only 15.3% of applicants were admitted. For the class of 2010, the middle 50% SAT range for matriculating students was 670-770 and 680-780 for verbal and math, respectively, while the ACT range was 29-34. Ninety percent of matriculating students graduated in the top ten percent of their high school class, 30% graduated as valedictorian, and 10.6% as salutatorian.

In 2007, Dartmouth was ranked eleventh among undergraduate programs at national universities by U.S. News & World Report. However, since Dartmouth is ranked in a category for national research universities, some have questioned the fairness of the ranking given the College's emphasis on undergraduate education. The 2006 Carnegie Foundation classification listed Dartmouth as the only majority-undergraduate, arts-and-sciences focused institution in the country that also had some graduate coexistence and very high research activity.