Osaka University (大阪大学 Ōsaka daigaku?), or Handai (阪大 Handai?) is a major national university in Osaka, Japan. It is the sixth oldest university in Japan, as the Prefectural Osaka Medical College, and formerly one of the Imperial Universities of Japan.

Hideki Yukawa obtained his Nobel Prize in Physics on his early work conducted at Osaka University.

Osaka University traces its origin back to 1869 when Osaka Prefecture Medical School was founded in downtown Osaka. The school was later transformed into the Prefectural Osaka Medical College with a university status by the University Ordinance (Imperial Ordinance No. 388 of 1918) in 1919. The college merged with the newly-founded College of Science to form Osaka Imperial University（大阪帝國大学） in 1931. Osaka Imperial University was inaugurated as the sixth imperial university in Japan. As part of the University, Osaka Technical College was later included to form the school of Engineering two years later. The university was eventually renamed as Osaka University in 1947.

Merging with Naniwa High School and Osaka High School as a result of the government's education system reform in 1949, Osaka University started its postwar era with five faculties: Science, Medicine, Engineering, Letters, and Law. After that, faculties, graduate schools, and research institutes have been successively established. Among these are the School of Engineering Science, the first of its kind among Japanese national universities, which draws upon the excellence of both sciences and engineering disciplines, and the School of Human Sciences, which covers its cross-disciplinary research interest as broadly as psychology, sociology, and education. Built on the then-existing faculties, 10 graduate schools were set up as part of the government's education system reform program in 1953. Two graduate schools, the Graduate School of Language and Culture and the cross-disciplinary and cross-institutional Osaka School of International Public Policy, add to the list, making the number of graduate schools reach 12 in 1994.

Suita, Toyonaka and Minoh are the university's three campuses. Home to the university's headquarters, the Suita campus extends across Suita city and Ibaraki city in Osaka prefecture. The Suita campus houses faculties of Human Sciences, Medicine, Dentistry, Pharmaceutical Sciences, and Engineering. It contains the Graduate School of Frontier Biosciences and a portion of the Graduate School of Information Science and Technology. The campus is also home to the Nationwide Joint Institute of Cyber Media Center and Research Center for Nuclear Physics. Because access to the campus by public transportation is relatively inconvenient, automobiles, motorcycles, and bicycles are commonly seen within the campus. While club activities are primarily conducted at the Toyonaka campus, only tennis circle activities are concentrated in the Suita campus because of its home to many tennis facilities.

The Toyonaka campus is home to faculties of Letters, Law, Economics, Science, and Engineering Science. It is also the academic base for Graduate Schools of International Public Policy, Language and Culture, (a portion of) Information Science, and the Center for the Practice of Legal and Political Expertise. Like the Suita campus, the Toyonaka campus also houses part of the National Institute of Cyber Media Center. All freshmen attend classes in Toyonaka campus at their first year of enrollment. 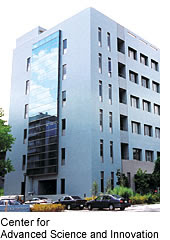 In addition to these three campus, the former Nakanoshima campus, the university's earliest campus located in downtown Osaka, had served as the hub for the faculty of medicine until the transfer to the Suita campus was completed in 1993. Starting from April 2004, the Nakanoshima campus has been transformed into "Nakanoshima Center", or "Campus Innovation Center", serving as a venue for information exchange and association with academic as well as non-academic communities. 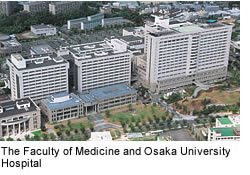 As of May 1, 2007, Osaka University had accepted 1,032 international students from 79 countries and regions.