University of Illinois at Chicago

The University of Illinois at Chicago, or UIC, is a state-funded public research university located in Chicago, Illinois, United States. Its campus is in the Near West Side community area, near the Chicago Loop. As the second campus established under the University of Illinois system, it is also the largest university in the Chicago area with approximately 28,000 students enrolled in 15 colleges. UIC operates the nation's largest medical school, with research expenditures exceeding $412 million and consistently in the top 50 U.S. institutions for research expenditures
Piecing Together the UIC History
UIC's rich history can be traced back to several private, Chicago-based health colleges founded during the late nineteenth century.
In 1913, these colleges incorporated with the University of Illinois (in Champaign-Urbana), as the Colleges of Medicine, Dentistry and Pharmacy. By 1961, these colleges and several others became the University of Illinois at the Medical Center (UIMC).

In 1946, U of I created a temporary, two-year branch campus on Navy Pier, to accommodate student veterans on the G.I. Bill. Students who successfully completed the first two years of requirements could go on to Urbana and finish their degree. After the first wave of veterans passed, demand for a public university education remained high. In 1961, Mayor Richard J. Daley offered the Harrison and Halsted site for a new, permanent campus.
In 1965, the University of Illinois at Chicago Circle (UICC), a degree-granting institution, opened its doors. Within five years, virtually every department offered graduate degrees.
In 1982, the U of I Medical Center (on the west side of campus) and Circle Campus (on the east side of campus) consolidated to form the University of Illinois at Chicago (UIC). This merger strengthened the University's potential for scholarly excellence, and pushed UIC to Carnegie Research 1 institution status in 1987.
In 2000, UIC launched its South Campus initiative, providing increased resident living space and additional research facilities. The South Campus unites the school with the neighborhood, creating a more vibrant community, all around. 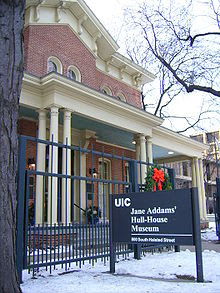 The university is run by the chancellor who is supported by seven vice chancellors, one CEO for administrative functions, and fifteen college deans. There is a library dean and three regional deans for colleges of medicine.
University of Illinois at Chicago ranked:
167th in the 2011 QS World University Ranking
at 9:02 PM

Email ThisBlogThis!Share to TwitterShare to FacebookShare to Pinterest
Labels: UIC, University of Illinois at Chicago, USA